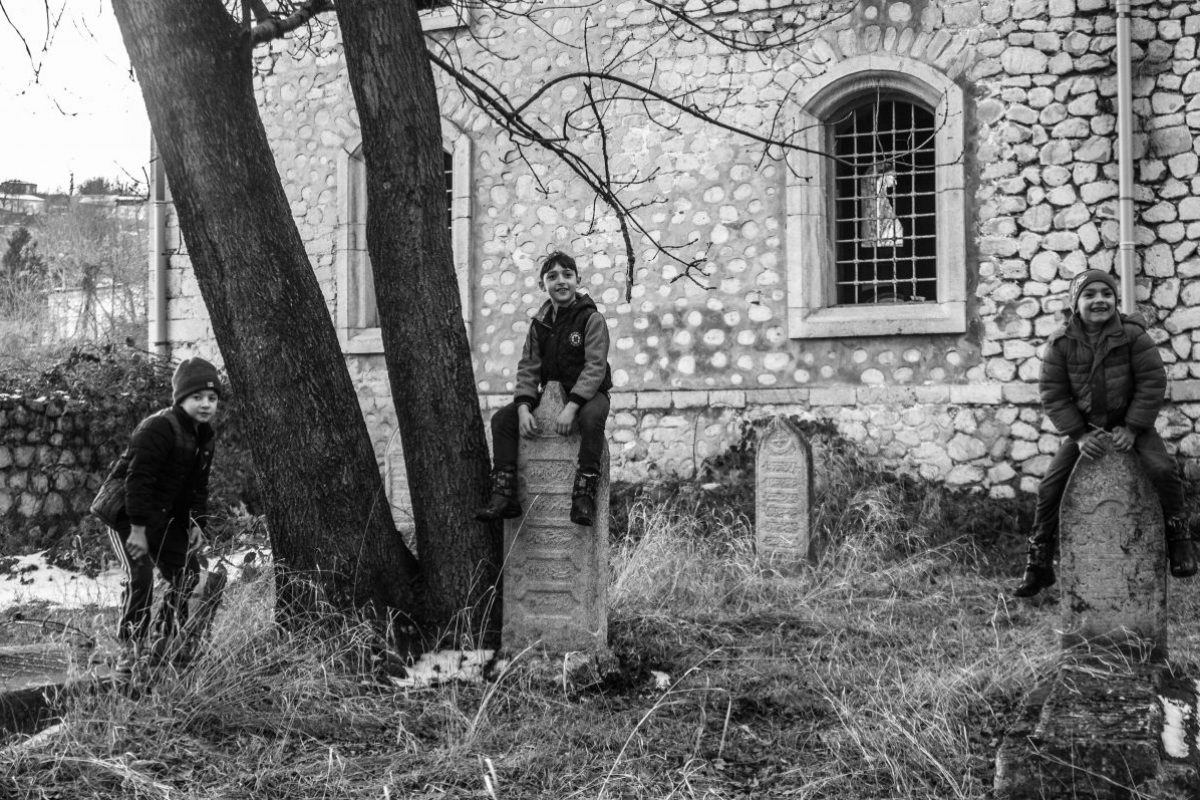 Perhaps all this around us is a dream,

Our human eyes the screen of this delusion,

The occurrences of life a motion picture show,

Perhaps all this around us is a dream.

The mosque was a well-preserved stone building with two brick minarets on its sides. I glanced inside through the main door: despite being dark, I noticed that the prayer hall was full of cardboard boxes, so it seemed to be used as a warehouse. On one of the sides of the building, within the wall that surrounds it, there was a cemetery. Three kids (between eight and ten years old) were playing. I hid behind a tree to take pictures without being noticed. One of them caught site of me very quickly and started to make signals at us. We approached. My friend communicated with them. They consented to be photographed and posed for me. Two of them climbed on some of the tombstones that contained words in Arabic. We asked them if they were afraid of playing in such a place. They replied they were not. They heard some noises, though, spoke about a ghost and then threw stones to one of the mosque windows. My friend asked them to calm down. The sound came from the building in front of the mosque. An old woman was watching the whole scene from her balcony unperturbed. The kids quickly continued to play among the tombs again. One covered his eyes leaning on a tombstone to count while the others ran to hide. 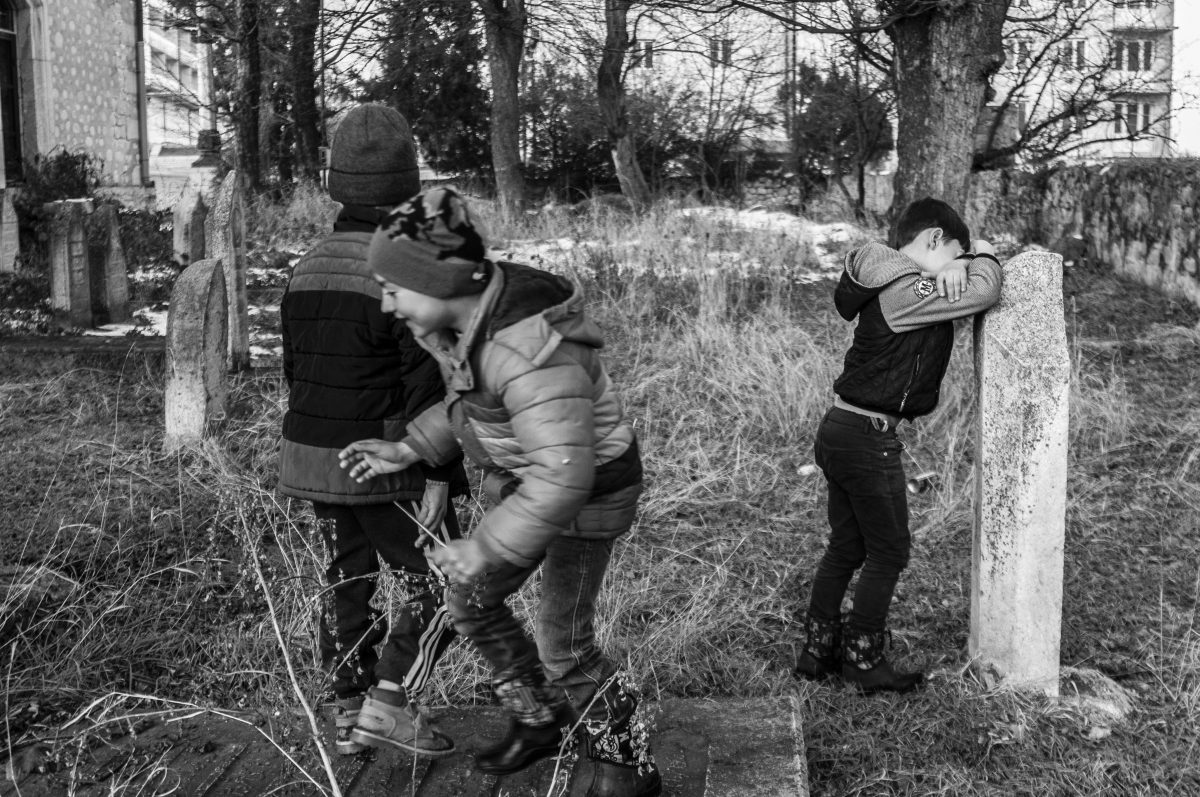 This XIX century monument is situated in the Karabakh city of Shushi. It has vegetation growing wild everywhere, it lost its function long ago and although its graveyard did not seem to be taken care of, it still looked full of life with those kids making the space theirs as they ran around and discovered its mysteries. Some of the gravestones lay on the ground with a layer of moss. Decontextualized, actually dead, that cemetery had become a playground for the neighborhood kids. I started thinking about the meaning of visiting a monument in this territory – something different from what we are used to. There are no signals for tourists. It has an abandoned look. No signs pointing where to go or where we must not pass. However, this is not an unknown monument and I am not a romantic traveler attempting to show antiquities to the world. This mosque has been studied and cataloged, despite its neglected appearance. Even so, one could imagine the reasons why more than twenty years after the war, one still has the feeling of being somewhere in the past. 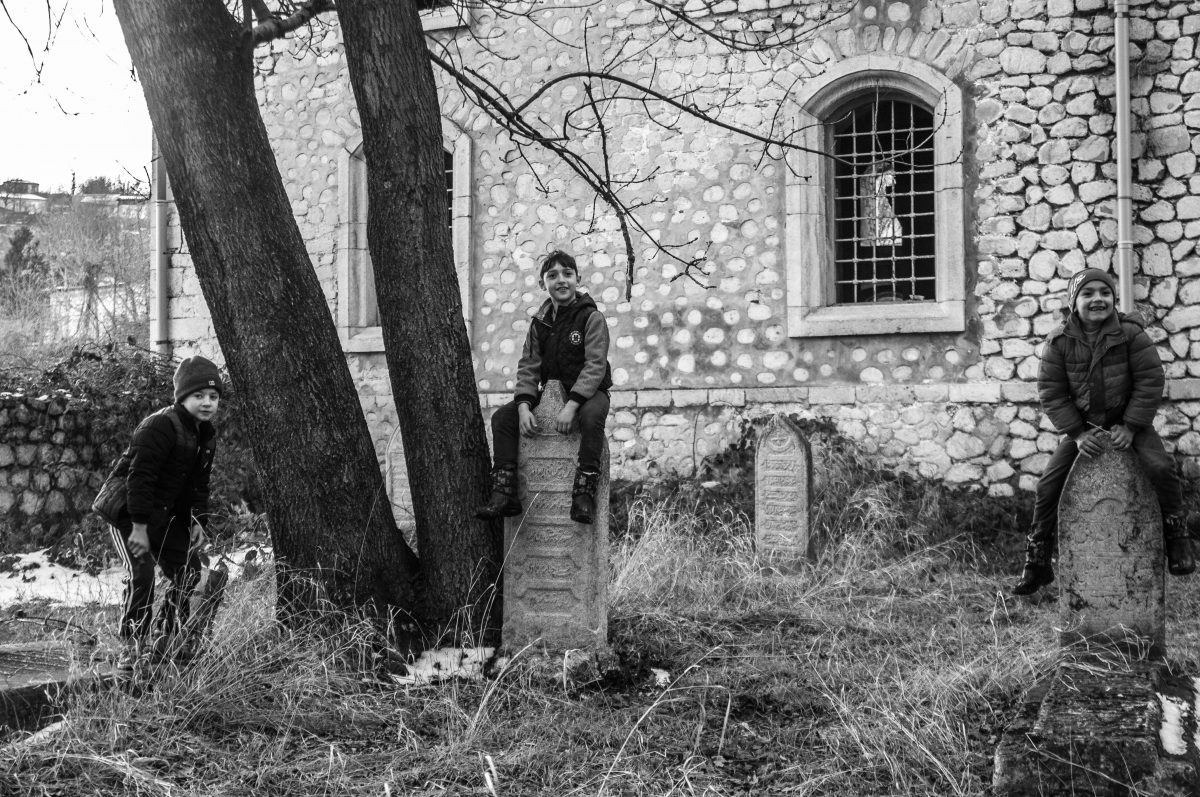 One of the aspects that makes me feel like a real traveler is the opportunity to speak with local people. Well, in this case through translations, but it is communication after all. In Stepanakert, the current capital of Artsakh, and very close to Shushi, I heard some disturbing stories. The woman who narrated them used to live in Baku before the war and had to abandon it, leaving everything behind. After my trip, I read that the first pogrom (massacre) happened in the Azerbaijani town Sumgait. After it, many Armenians tried to escape. Her own experience: to run away, her husband, a military, had to turn to a Russian coworker to help them. This Russian soldier helped them escape in a military car and had difficulties entering Stepanakert because of the patrols and road closures, but they finally succeeded. Many others did not. The woman also related other events she had heard about. Like that man that was buried alive together with his donkey. Or the worker that was stabbed in his back while he was on his knees drinking water. His corpse was found after the people in the village saw his horses coming back without their owner. I can hardly imagine situating those events in time and in a particular place. But those memories remained as indelible images; no matter having really witnessed the events and no matter how distant they have now become. 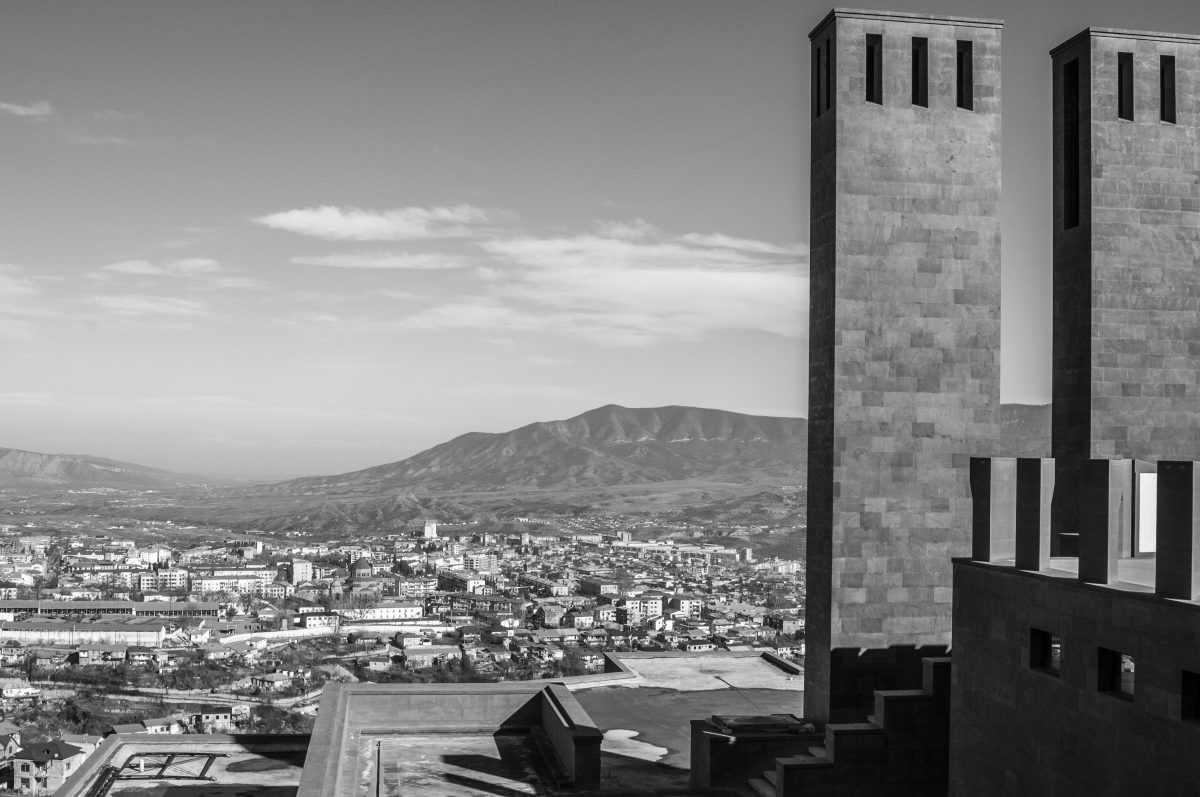 Her grandson did not have similar stories to tell. Instead, he took us up to a hill to have a good view of Stepanakert. Maybe this is not the big city one would expect as the capital of a country, although its views were stunning from that hill, where we took the opportunity to visit a building under construction whose structure resembled a utopic temple. After soaking up the sun, the young boy led us to another area, this time less magnificent, but much more enchanting. We crossed the streets of that part of the outskirts again and walked towards a different hill. Halfway, we followed him through a small meadow where I could only see some objects on the floor. Crosses in different sizes, candle sediments, rocks and religious images such as the Virgin Mary or an Armenian Apostolic church miniature. It was a place for sacrifices, and these objects were left there by the families who practiced these rituals. Nearby there was a leafless tree in whose branches some parts of the slaughtered animals were hanging: a goat’s head, hooves, and rooster’s tails and legs. The shy boy said that some months ago he fell down on the street below their balcony. Fortunately, he did not break anything. This small miracle led his family to make a sacrifice of gratitude in this exact place. 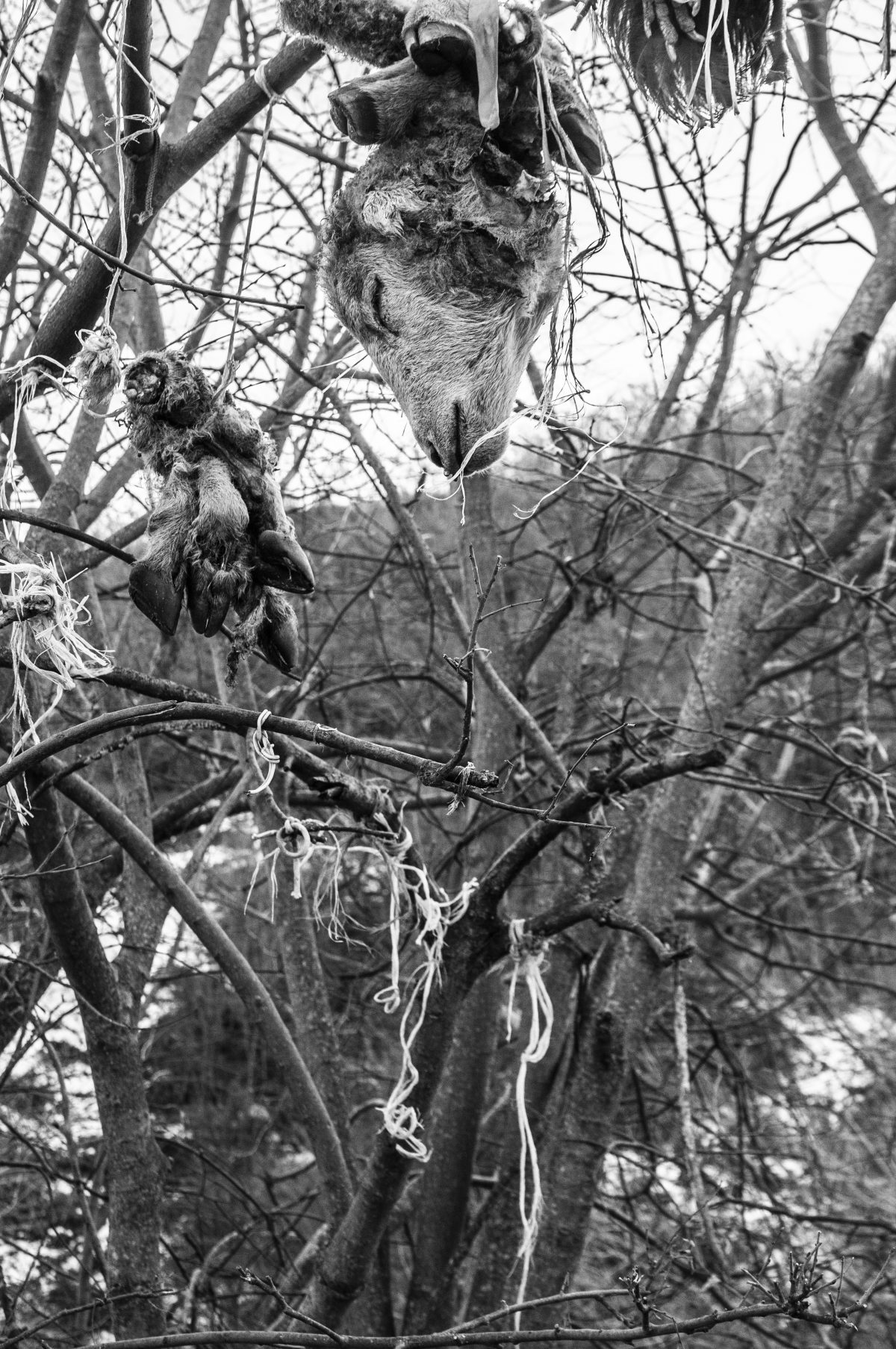 I felt my brief trip to Artsakh was really worth it after these small but authentic discoveries. Luckily, local people allowed me to take a glance at their enigmatic corners, and the whole experience helped me create a new perspective, to understand better my surroundings, and even to take a part of its magic with me. Nevertheless, I did not stop feeling that there was something tragic behind this aspect of time standing still as if I could not avoid having a question permanently prowling: what if…? Undoubtedly, winter was showing me its more disturbing face.