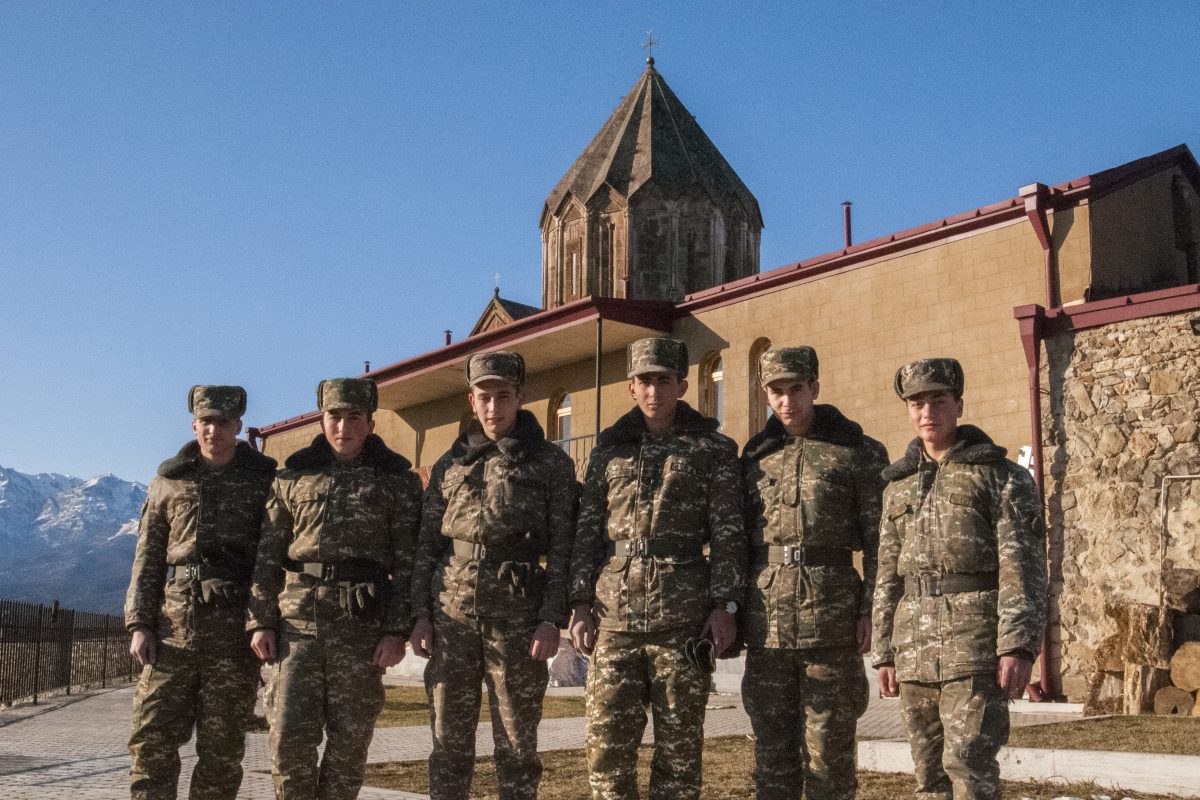 Traveling from Stepanakert to Gandzasar Monastery can be an extravagant experience. In my case, I traveled in a marshrutka driven by a bad-tempered driver. As soon as he entered the vehicle, he complained about one of the passengers that had paid less for her ticket. During the whole trip, he did not stop talking, even if nobody replied to any of his complaints. At the beginning of the trip, he decided to play the radio at high volume, which unfortunately for me reminded me of other trips by bus on the other side of the world. Clearly, it was forbidden to get bored, distracted, entertained on one’s own.

My friend asked the driver to lower the volume. He took it as an offense. He switched off the radio, argued with my friend and, among other unpleasant things, he said that in fifteen years no passenger had ever complained to him. Moreover, he said we were the worst passengers he had ever had. After a while, almost at our destination, he turned off the main road and stopped in what it looked like a sand mine. Seemingly, he had business there with a friend. He went inside the mine, checked something, took what he needed and put it in the van. In all this time, nobody said anything; nobody was in a hurry. My friend was not surprised. “It is normal.”

Once in the village of Vank, we took a taxi up to the monastery. It was January 6th, for me the Epiphany, for Armenian people Christmas day. There was a commemoration in the ancient church, so different people came to celebrate. One of them was the Head of Artsakh Parliament. I also found a group of soldiers. They were young, undoubtedly some boys doing their mandatory army service. They accepted when we asked them to pose for a photo. It may have been the excess of light, but the fact is that the photo came out with a lot of noise. It even looks like an analog photograph.

In my brief trip to Artsakh, I also had the chance to visit Martuni, a city very close to the current border with Azerbaijan. The atmosphere looked very different than in Stepanakert or any other city I had visited before. The first thing that attracted my attention was the high presence of soldiers. Then, the poor condition of the streets and buildings, the feeling of isolation. I did not see anything new, and in my eyes, everything seemed incomplete, transitory. Twenty-five years look like too long a period for stagnation. Proof of this was the mural in a downtown building that celebrates the XXVII Congress of the Communist Party of the Soviet Union, presumably there since 1986, whose slogan is “Peace to the World.” The signs of war throughout the city make the conservation of this mural of special importance.

We found some young people around the city. A couple of young girls refused to be photographed. A group of kids, however, accepted. One of them, though, ran away and hid behind a car. They all found that very funny. Although they wanted a picture, one of them asked if it was for TV. My friend said no, but he replied that this was what he heard the previous time and then he appeared on TV.

A little later we found three other children playing in an alley. We also asked them to pose for a photo. Some instants before I was looking at the dilapidated aspect of an old house with a couple of metal rubbish bins in front. I asked the kids to stand in front of it to take the photo.

Nevertheless, a moment afterward I wondered if that had been appropriate. I had the impression to have used that location to put those kids in a certain context: a city that keeps the memory of the war, which is the image that any photographer would wish to take in such a place. 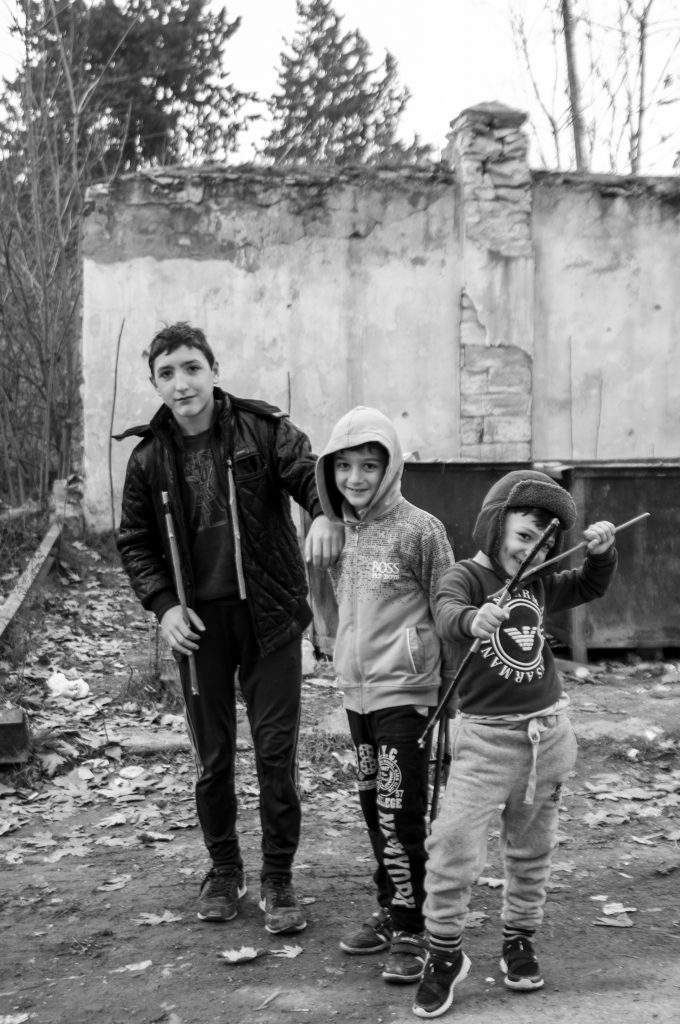 One of the streets fascinated me: pines accompanied the wooden and imperfect houses, and on their roofs, the moss extended freely. There was a special atmosphere, like a fresher air for the presence of those trees and some humidity, and strengthened by the smell of a close barbecue.

I took a picture of the last building on the street, a beautiful house with a short path made of stones that seemed to be made to avoid stepping on the grass, with the difference that in that garden there was no trace of grass, but rather some moss. At that precise moment, a woman put her head out the door and spoke to us. At first, I thought she could have felt offended for me taking photos of her house. But she actually wanted me to enter and take more photos inside. She wanted us to see the bad conditions of her home. Inside, the cracks and moistures on the walls were noticeable. The access to the roof was not recommended since it could fall down. She explained to us the problems the house presents and that she was waiting for a new house promised by the government. She seemed to believe that inviting foreigners to see the conditions in which she lives could make her situation change. I took some photos and then we continued the visit to Martuni before it got completely dark. 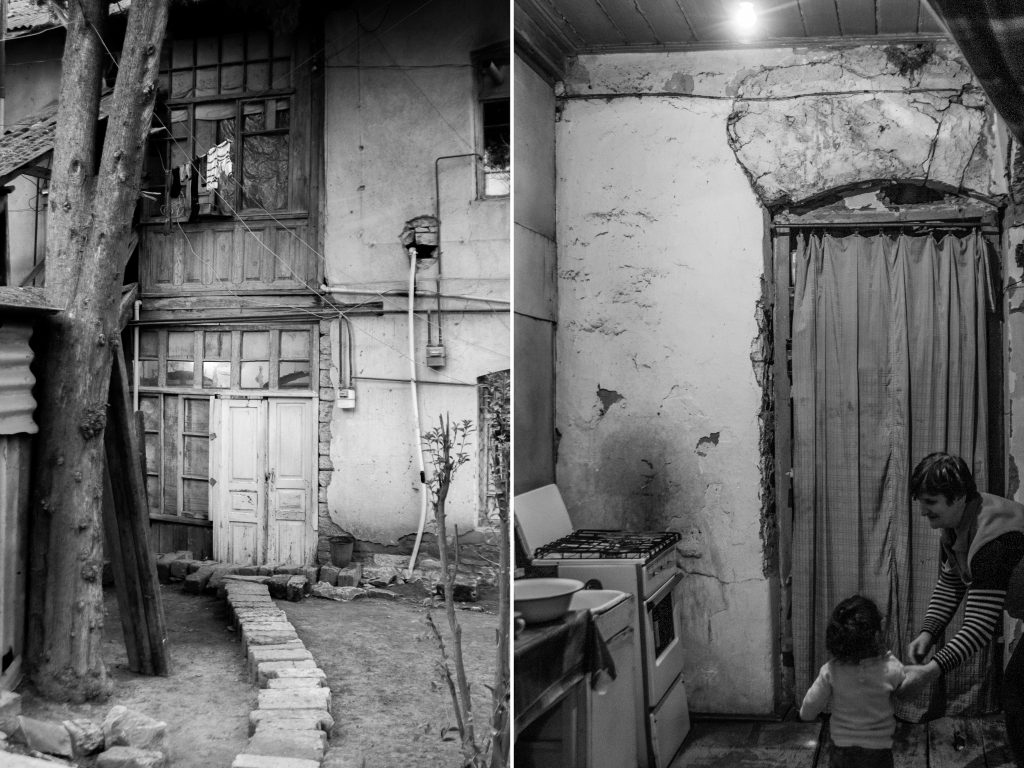