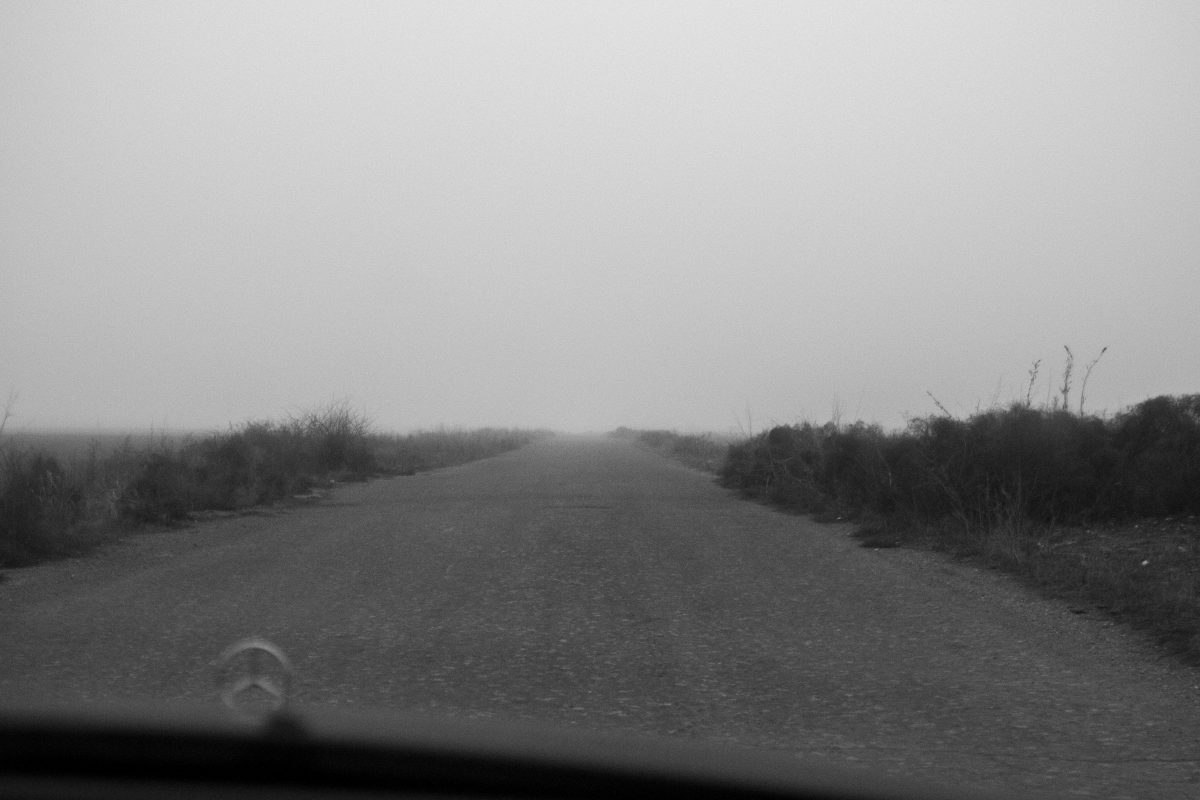 Joy is but a momentary memory of dreams,

Laughter and high spirits the echoes of some fleeting hope,

The smiles of men just shimmerings of moonlight,

Joy is but a momentary memory of dreams.

Shushi struck me as an amazing discovery. The city preserves the traces of war surprisingly well. It has several buildings in ruins, poor conditions in some areas, and the snow and the winter accentuate the feeling of desolation. After a visit to a XIX century building in ruins and the new main church of the city, we were led by a couple of local teenagers to one of the mosques of Shushi. We had seen some towers, but we were not sure if they were actually minarets. When my friend asked a girl that was passing by with a boy, she offered herself to take us there.

I saw abandoned old cars (here and throughout Armenia, actually), vegetation growing out of control among the ruins, a part of the city with almost no presence of human beings. The two teenagers left us near the mosque, the one that could be freely entered. The access door to the minarets was closed, but not the access to the mosque through spiral staircases. Everything was in poor condition, and some sections of the stairs could not be easily overcome. Inside the mosque, the large space divided by the columns could be like any other mosque. Not because of its conditions, though, since there was nothing valuable about it: chipped walls that showed the structure of bricks, dust, and stones all over the floor… We continued ascending towards the snow-covered roof, at the foot of the minarets. The views from there were beautiful. Caution was a must. Stepping on a piece of defective roof underneath the snow did not sound unlikely.

The surroundings of the mosque also seemed to be abandoned. There was snow everywhere and no people at all. There was an old, large residential building in ruins on the other side of the mosque. That whole area looked like a film set. 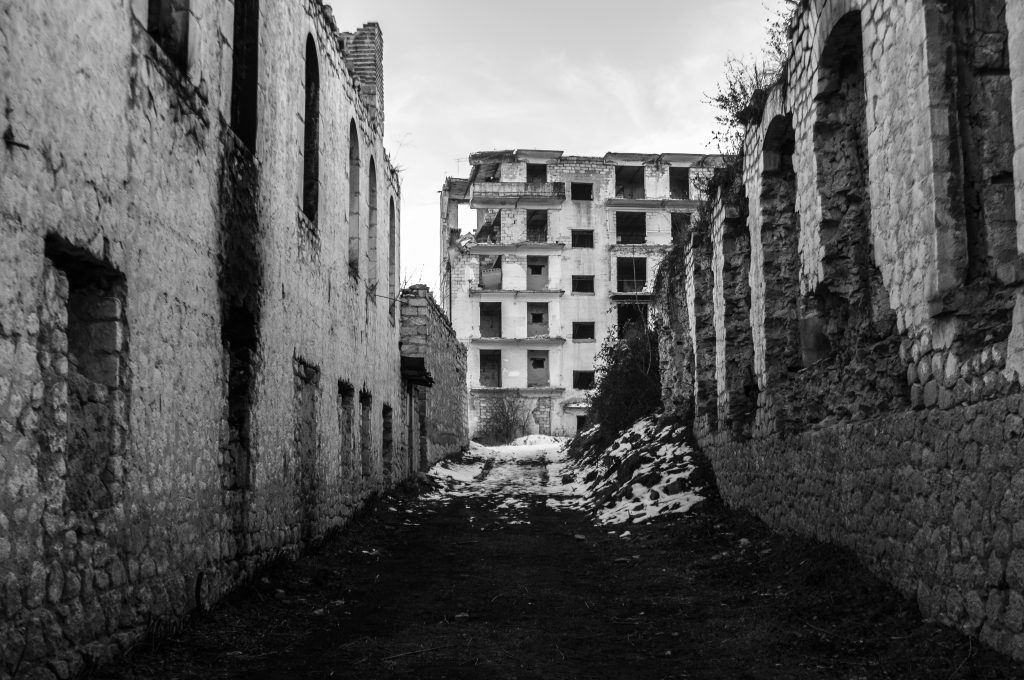 However, the most spectacular place was farther away, near the current border with Azerbaijan. I had read before coming to Armenia about a ghost town called Aghdam. I knew it was a place where people were not allowed to enter. That the city remained uninhabited as an important strategic point for a hypothetical war. I knew it would be difficult to approach it. But it was possible. On my way back to Stepanakert from Martuni, our taxi took the longest route so that it could pass through Aghdam.

The idea of going through the heart of the conflict was exciting if such banality can be said by a foreigner who has not lived the war or cannot imagine what these lands have seen in the last thirty years. It is about the emotion of crossing a place not recommended, of being in a region where, three years ago, and for a few days, the soldiers of the neighboring country went over the border, shot and killed, creating a conflict for which both sides had casualties among soldiers and civilians. The road that connects Martuni with Aghdam is in bad conditions and cars sometimes cannot survive it. On our way, looking to the right, I imagined seeing Azerbaijan. My map did not show me a clear line that indicated the current border. It was not close, but not far enough to feel completely calm, especially if we consider that the same territory would be a battlefield if a new conflict were triggered. Sometimes we could not see the horizon because of the trenches for self-defense. An antiaircraft radar turning its parabolic on the top of a hill caught my attention, letting us know that it was not there just as decoration. 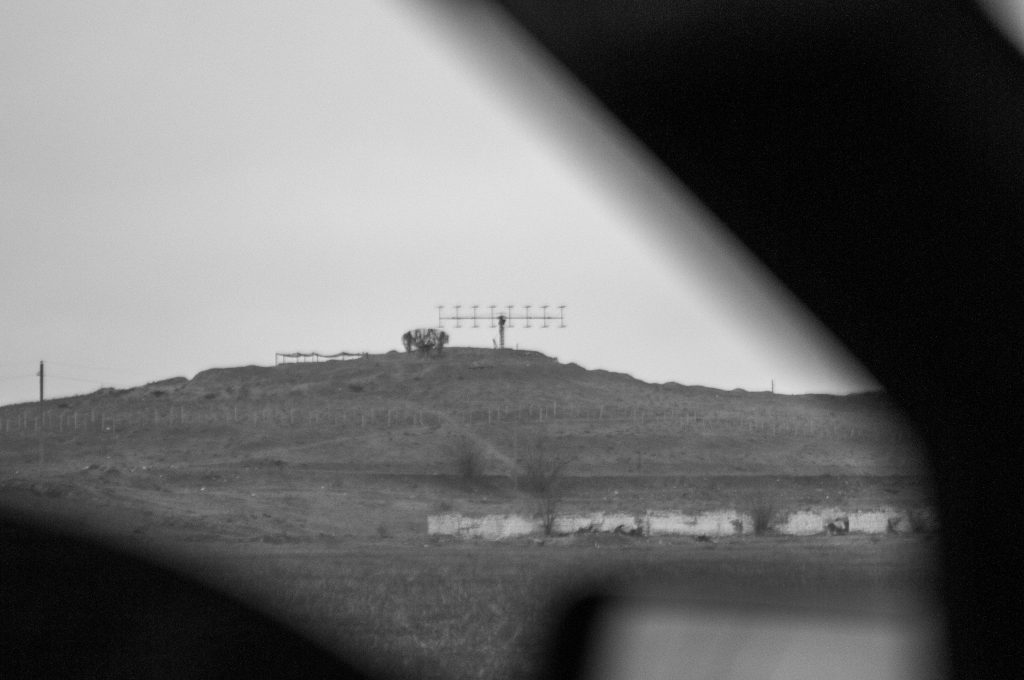 That day was foggy. The landscape was desolate. Although the ruins of the houses announced that the city was close, the Google Maps application did not show it. Naturally, this app shows the official versions. That is, we were theoretically in Azerbaijan, although de facto we obviously were not. However, the city of Aghdam, perhaps because it has not been inhabited for twenty-five years, did not appear. The city is there, although in ruins. The roads lead to the city; the buildings can be seen, its streets could be accessed if the police guarding the entrance allowed it. But, as a ghost town, officially Aghdam does not exist. For that reason, to know exactly where I was while I was moving in the car, I could not do anything but uneasily control the map, although from another app, MAPS.ME, which shows de facto territories. 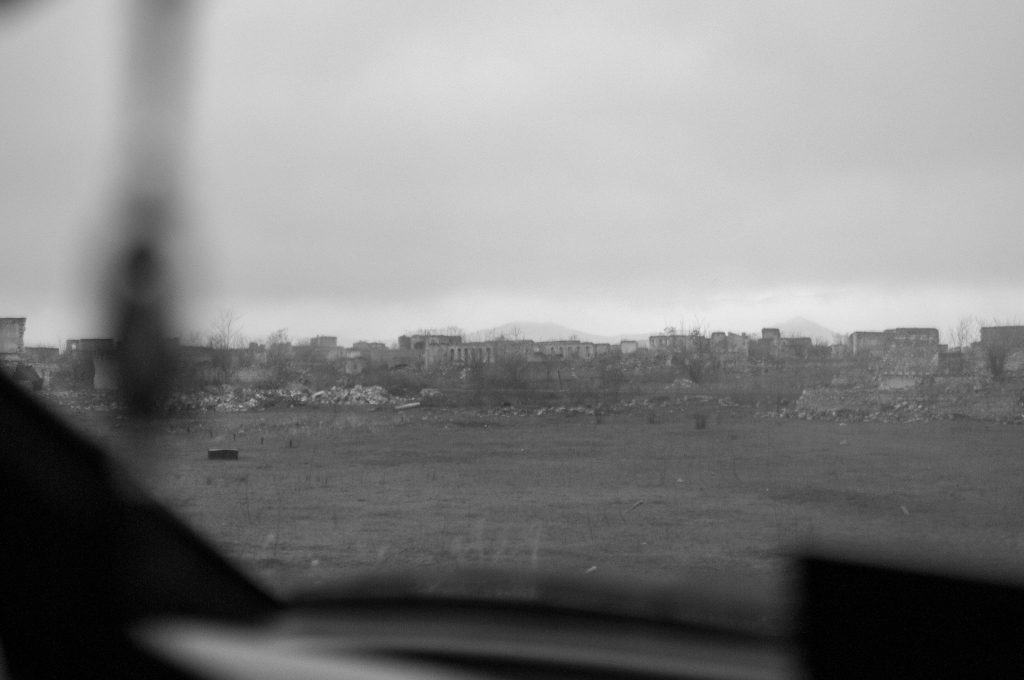 We could not stop for a moment. The signs of the ruins could be seen from afar. And already inside the city, I was warned that I should hide the camera: some police cars were passing by, and it was forbidden to photograph the area. The limit to continue entering Aghdam was a police stand that controlled the access. Then the road turned left, so we started leaving the city behind. I really could not take pictures from the heart of Aghdam, but rather from the surroundings. 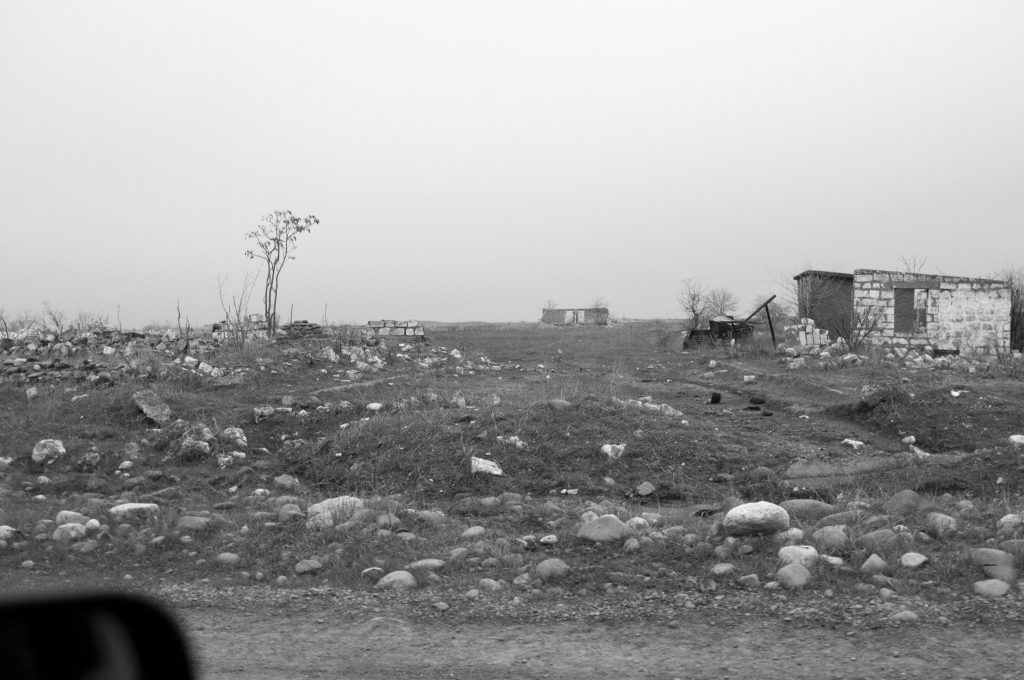 I do not remember well what I saw inside, where I did not photograph: the same demolished buildings as in the surrounding areas? Surely nothing special, since I could not get into the streets of Aghdam or see its famous mosque. I can barely remember beyond the images I captured with my camera. Although I do recall the feeling of being in a unique place. And as a ghost, it must remain isolated, enigmatic. No sooner did I approach Aghdam, than I went away with the same questions, doubts, and curiosity with which I had traveled.