Adventures of Ines in Artsakh 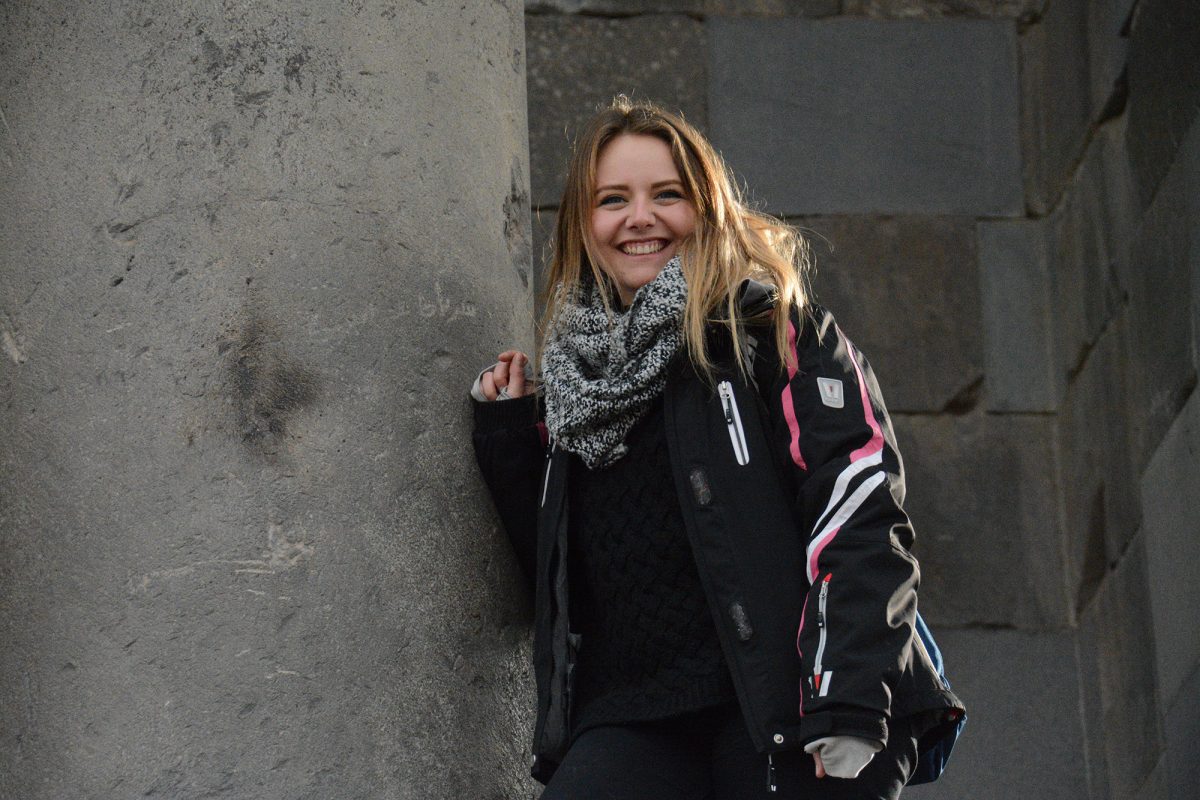 Like every year, and this, three times a year, Birthright Armenia and AVC organize a big 4 days excursion to Artsakh, better known to Europeans as Haut-Karabagh. We sleep in host families on the spot, so lovable each other. Before telling this wonderful adventure that we lived, I will briefly introduce myself. My name is Inès and I am a french girl without Armenian origins. I am in Armenia thanks to the civic service program within AVC. It’s been already 5 months since I arrived in this wonderful country, and, for me, going to Artsakh was a very great opportunity and an essential step being in Armenia.

The next lines will reflect my vision of this trip and my feelings, which don’t engage the impressions of other volunteers. I’m going to tell you how a simple french girl like me can live this kind of experience when it was 6 months ago she knew absolutely nothing about Armenia. The first day of this excursion was devoted to the road towards our destination. On the way, we made a stop to visit Tatev monastery. We took the ropeway (Wings of Tatev) to get there, where we could eat in the « seghanatun » (the room where the religious eat). Once the meal was over and our eyes filled with wonders of the landscape, we joined Shushi. Shushi is the second largest city of Artsakh where we were getting to sleep the next 3 nights. The evening was dedicated to sharing with our host families, a good way of interaction with the locals. Our first « activity » of the weekend was the speech of David Babayan, spokesman of the Artsakh government, about the current situation in Artsakh and its History. From there, we were directly immersed in the excitement of the excursion. But the moment that followed couldn’t more confront us with the reality of Artsakh. We visited two military bases. The first, which is the best in its category, and the second, which is the largest of Artsakh, where we had the opportunity to eat with soldiers. And there, for me, it was a very powerful moment of the weekend. I had the reality of the war right in front of my eyes just a few kilometers from the front line. I was filled with emotion and of respect listening then to talk. « There are so young » I repeated constantly. Between the age of 18 and 20 years old, the young Armenians are called up for military service and some of them enlist all their life. They risk this one to defend the country and to allow its inhabitants to live in a certain security. Without them, daily life would be a constant fear for their lives and Artsakh an Azeri land. I insist on that because I didn’t realize this reality, sad as it may seem, it is indeed the reality. Certainly, it marked more than deeply my experience in Artsakh as well as my spirit. 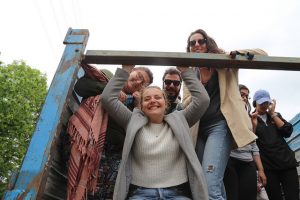 Although the weather was not very favorable, we could still admire the beauty of Papik and Tatik monument, one of the symbols of Artsakh. And to finish this first day in a great way, we went up to the Gandzasar monastery to visit it and to have dinner there. The view of the surrounding mountains was breathtaking. And in spite of the rain, we couldn’t be disappointed, the clouds melted between the reliefs of the mountains to reveal us a sublime visual spectacle. On Sunday, we explored Shushi on foot and we noticed the impressive number of buildings destroyed or damaged by 1988/1994 war. Although many building has been renovated and/or rebuilt (such as roads) the city stay still marked by the war. In our city tour, we finally arrived at Ghazanchetsots Cathedral, which is one of the largest churches in Armenian world. As it was Sunday we were able to attend Mass. But for me, the most beautiful discovery in this cathedral was when we went down into a small contemplation room in the basement. In the ceiling, there is a hole with a wonderful acoustic. So we took turns saying positive words, as important wishes and/or messages. It may sound banal, but in reality, the acoustics of this hole sends back an echo of our voice as a return of sound from a microphone. In reality, just the person who says the words can hear what he is saying, that is why the prayers used to go there. After this experience, we left for the house of a local, friends of Birthright for years, who had prepared us a more than a copious meal.

At the end of this delicious meal was waiting for us a truck with a big bucket where we all went up to a local winery. It was a bit like the « Artsakh convertible », a very fun drive that allowed us to enjoy the open landscape. There we tasted the wine of their manufacture, then we went in a museum of the soldier who died during the Artsakh war. A rather special museum because it is not a government’s initiative but that of a mother who lost her son during the war. And then she wanted to create a museum in honor of the memory of all the soldiers who perished during these periods. 3382 photos of soldiers were erected on the wall (3250 dead and 132 missing) recreating the Artsakh flag as well as their personal belongings. Another very powerful moment, with a lot of respect for these men and this mother who did everything possible to carry out this project in their memory.

Then came the moment of the «wine mob », a tradition of this excursion to Artsakh. The concept is simple: in a group of 4 or 5, we had a bottle of wine and we had to go and drink it with the locals and spend a convivial moment discussing and sharing it together. Then, each group had their own story to tell, and each one was truly unique and unforgettable. We can only admire the generosity of this person who open us their doors without even knowing us by offering us their legendary hospitality, serve you fruits, candy and sometimes you event leave with small presents (incredible). The evening that followed was emotional because it was the « guénats » (toats) evening worn by the volunteers. We would have dinner with a local friend of Birthright and, one at a time, we raised our glasses to express what we wanted. Everyone had a story to tell, anecdotes, advice, thanks… You can be sure that many tears were shed that night, but positive tears, because there was only one overriding purpose: we were all proud to be « Armenian by origin » or « Armenian by choice », to share those moments together and to live that experience. We could all affirm the unique connexion we feel with Armenia.

The last day already arrives and for those that they wanted it a magnificent hiking awaited us at dawn. The nature was so beautiful, we took a breath of fresh air walking in the Shushi mountains while admiring its reliefs.

The time of the return arrives and it’s filled with emotions and the head full of souvenirs that we return in Yerevan. On the way, we stop again for a delicious meal. In the bus, the atmosphere is at its height and the emotions don’t choke because we all sing together traditional Armenian songs.

Simply put, Artsakh was a really deep and emotional trip and spite being 100% French, I was so touched by their History and attached to their kindness and generosity. And although I don’t have Armenian blood in my veins, I was totally integrated like the other volunteers. To this day, I’m not Armenian by origin but Armenian by choice.