I Thought I Was Just Passing Through… 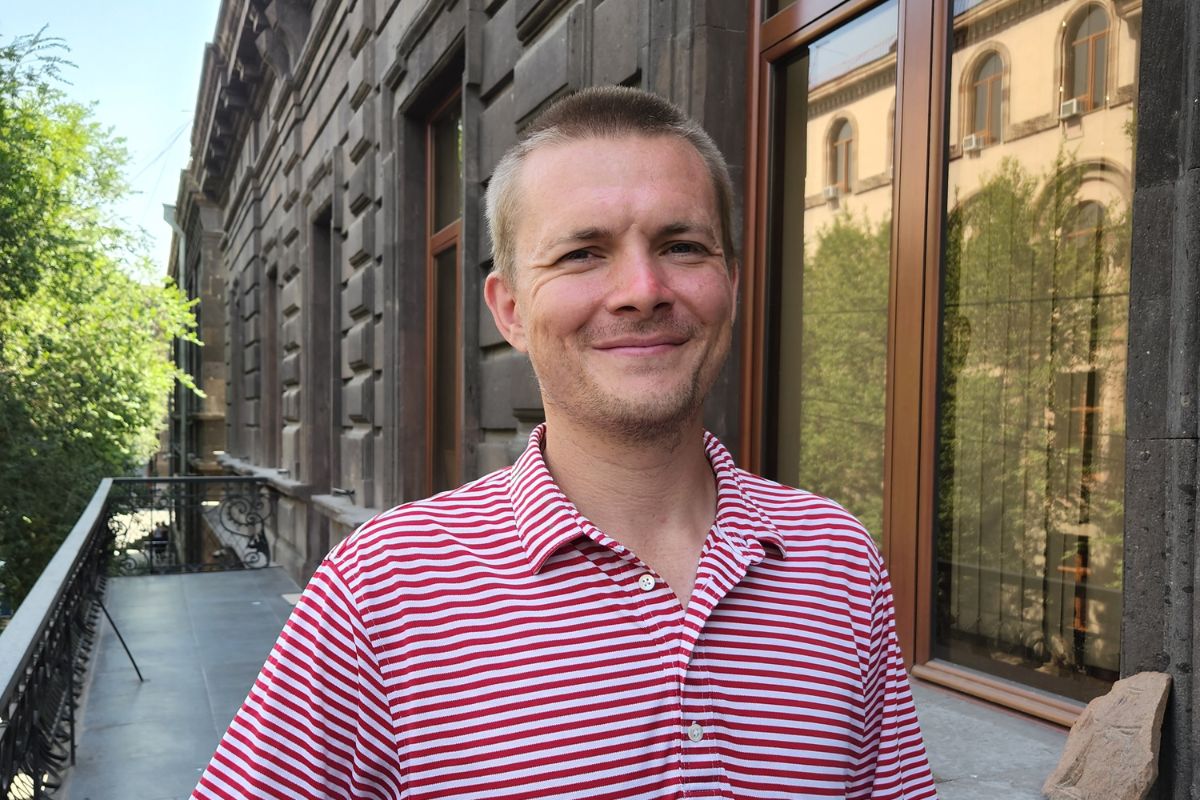 I don’t know how other non-Armenian volunteers learned about AVC or how long it took them to commit to the program, but I discovered AVC several years before I decided to take the plunge, filing it in the back of my brain for use somewhere down the road. Volunteering does look great on a resume, and it does, after all, when done right, make a person feel selfless, so the volunteering AVC would set up for me was appealing. Since the start of adulthood, I have been perpetually looking for a new country to visit (I spent most of my 20s abroad), and association with AVC would effectively guarantee me a structured, medium-term stay in Armenia (which I had never visited), so I was totally convinced of AVC’s appropriateness for me. All that remained was for the timing to be right…

Enter: COVID-19. The pandemic threw the whole world for a loop, so I should feel no shame in admitting it threw me for one personally. A week-long transatlantic trip to Ireland I had booked on a whim and I would be going on for a lark in April 2020 ended up having to be postponed more times than I care to remember, because of travel restrictions that stubbornly stayed in place but, maddeningly, slightly changed in form from one month to the next. With the coming of the summer break in 2022, I could finally make use of my Boston-Dublin trip… in a sense. I at last had occasion to pull AVC from the back of my mind to its forefront, reasoning that for a nominal fee I could extend my trip on the other side of the ocean from one week to two months and spend practically all that time in Armenia rather than Ireland, just using the latter as a layover on my way to the former. I pored over the dollars and “sense” of the matter, determining that staying in Armenia in an extremely economical home-stay and completing my long-imagined tour of duty as an overseas volunteer would be far superior for my personal and professional development to staying in Ireland spending a small fortune for “fun.” So, I passed for the time being on a trip to my “ancestral homeland,” Ireland, in favor of going to Armenia, where I would encounter so many other foreigners by citizenship who regarded the country as their own “ancestral homeland.”

Armenia on the radar

One reason why Armenia was on my radar and had been on it since childhood was its membership in the Soviet Union. I fell in love with geography right around the same time that the fall of the USSR and “Balkanization” forced the reissuing of maps and globes worldwide, and I told myself as a child I would one day travel to the new nations springing up to find out who lived there and how. It is fair to say, then, that I am interested in “transitology,” and prior to Armenia I had been to several other post-Communist states, in all cases examining them to evaluate their progress from one-party states with stagnant command economies to developed liberal democracies. In Armenia, I found plenty of interesting developments– and, in certain regards, an equally interesting lack thereof. I was impressed with the condition of Armenia’s “primary sector,” and I learned that Armenian agriculture had outperformed that of most other post-Soviet states after the dissolution of the USSR; perhaps it would have been a disgrace to the newly reinstated “apricot-colored” flag if the production of the national fruit had declined at all. I could see some lingering signs in 2022 of the cronyism and corruption which in the dying days (if not decades) of the Soviet Union had become the most reliable avenue to get anything accomplished, but locals assured me the situation had improved dramatically, particularly in the past five years. I marveled at much of the architecture in Armenia and its overall level of “visual modernity” in certain places, but I also noted that very many people still resided in Soviet apartment blocks tending to look alike in their exterior lifelessness and utilizing a confusing address system inherited directly from Communist times. I could report growth in Armenia’s environmental awareness and management of its natural resources, though, to be fair, it did not have to contend with nearly as much of a post-Soviet biohazard as some of the other states. One of the more famous jokes told among the Soviet people was: “We pretend to work, and they pretend to pay.” I can honestly remark that the resolution of this farcical state of affairs in Armenia as a whole remains a work in progress on both ends, but I would be remiss not to point out that in just a few months in Armenia I met numerous highly industrious individuals. I will be working in Uzbekistan for a year after my stint in Armenia, and in that other post-Soviet state I will continue to reflect carefully on the Armenian experience with transition and fall back on it as a basis for comparison.

Armenia, of course, has plenty of charms all its own, stemming from things more deeply-rooted and more important than Soviet times, transcending them in defining it. I enjoyed learning the Armenian script, overcoming the occasional frustration inherent, for instance, in there being at first glance three minor variations on the letter “U”– with not one of them corresponding in sound to the English “U” (one corresponds to “S,” another to “A,” the last to “M”). I bet millions of people praise Armenian cuisine whenever they can, so instead of belaboring the larger point I’ll just say I do not anticipate ever seeing elsewhere such extensive and ingenious implementation of eggplant. Armenians like to point out that their country was the first in the world to have Christianity as a state religion, and, setting aside the debates over this distinction, I can say, based on what I personally observed, that they have worked out a unique form of Christian worship over a doubtlessly lengthy history. What ultimately matters most in evaluating any country is its people, and I have a sky-high opinion of Armenians in light of how they treated me. Armenians were welcoming and kind to me, although I would be hard-pressed to pass for an ethnic Armenian and, outside of Hayastan, knew absolutely no words in their language upon arrival (the first few times I was addressed as “Michael-jan,” I had to strain myself to avoid telling the person “John” was not my middle or last name, and far more than a few times when I was asked if some food was lav I assumed they knew the basic English word “love” and wanted to know if that was my stance toward the dish). I was extraordinarily impressed with the Armenian Diaspora– whose members are viewed as belonging to the Armenian nation. It was firstly amazing to me that Armenia, in apparent violation of the law of gravitation, could exert such a strong pull over so many people coming from so far away despite its small geographic size (it must have some sort of “magic” working in its favor) and secondly amazing to me that so many of those individuals thus pulled back to the “homeland” were so brilliant. On the way to Yerevan after an excursion, I talked to a “French Canadian Syrian Armenian”– who spoke English about as well as anyone else I have ever met– about my peace proposal for the Artsakh dispute. With deeper insights into Armenian history than I had and a fiery defense of her position, she convinced me by the end of the ride my plan was unworkable. That memorable conversation actually inspired me to dream up an acrostic:

Armenia was a trip, in more ways than one, in far more ways than I could have imagined from the outset. I cannot guarantee I will be back there physically, but I may be back there mentally, if just briefly, every day for the rest of my life, since it was the stage for innumerable lessons and thought-provoking occurrences. I went to Armenia believing I would just be passing through; time would tell that I was there for much more and that Armenia would stay with me. I have AVC to thank and a people to remember fondly, forever.