Of marshrutkas, slippery floors and lovely host families…musings of an Englishman in Armenia—a country with a big heart. 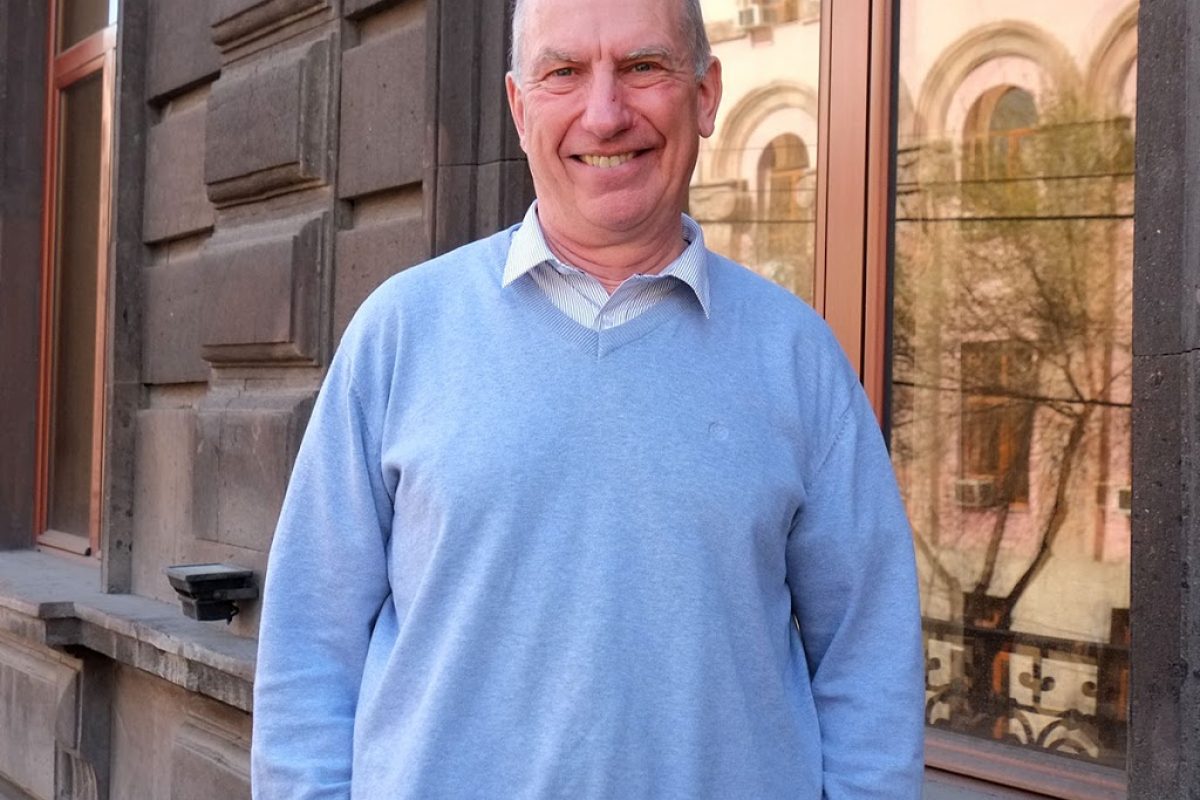 I recently completed a couple of months volunteering with AVC and was asked to write about my adventure.  Naturally there are numerous thoughts about the experience. Below is a very personal view.

What comes to mind immediately is riding on a marshrutka (the local minibus) sitting in the back seat with a cylinder of ‘natural gas’ strategically placed under the back seat. No worry about safety there, then. And crossing the road with a green light indicating that it is safe for pedestrians to cross, even though left and right turning traffic also pass across the pedestrian’s path almost but fotunately not quite simultaneously. And almost always having to stand on the buses – they are almost always full, no matter what time of day you use them. And using the trolleybuses…. finding that they are half the price of the bus. Then realising why. They run much slower. And do not work when there are electricity power-cuts. (There were three power cuts in one period of two weeks I was there!). And do not work when the electrical connector falls off its guide-wire following a small explosion. (No worries there, the driver jumped out of the cab, armed with a spanner, and within 10 minutes had the vehicle moving again).

And taking various shared taxies to and from Gyumri, Vanadzor and Stepanakert. Even then on one trip may be one hour was spent in various garages with the driver’s head under the bonnet. No idea what the problem was, my ‘hayeren’ did not rise to the vagaries of car mechanics. And another time stopping en route to one of the towns waiting for maybe one hour for an extra 2 passengers (could these passengers have come an hour earlier, when there were 4 other passengers in the taxi wanting to proceed?).

And being given a number to ring on arrival for my homestay in Stepanakert, but finding that my Armenian numbered phone needs roaming in Artsakh to work,  although the country code there is still +374. Problem ch’ka, somehow, despite the locals nearby not knowing English.

And visiting a village near Armavir, finding the convenience was inconvenient…. down the garden. No problem though. Torch provided at night. And the convenience was similar at a local beauty spot with magnificent views of Azerbaijan and Armenia. And when conveniences are found in Yerevan malls they are so often closed for cleaning….. the ubiquitous cleaning lady armed with a mop indicates the status in no uncertain terms! Come to think of it, the lack of conveniences was so often inconvenient!

And shiny floors. Which look so wonderfully clean. But slippery…. very slippery. After some adjustment to walking technique, the foreigner can survive.

And separate saunas in sports centres…. for the different sexes. Why? When both sexes are allowed to swim together. And the necessity of a brief medical before being allowed to swim. Why? (Not to worry, I discovered that my blood pressure is so very low for a man of my age).

Then learning that the whole country is perhaps controlled by 40 ‘Armenian oligarchs’. One family has a monopoly on sugar and butter importation, another controls the import of bananas, another owns a well-known sweet factory, and one owns the largest supermarket chain. And one finances the building of churches.

Having returned from my three provincial towns one comment was that I was ‘bold’. ‘Bold?’ – how can I be bold when I don’t speak the local language, have great difficulty in reading it, and have little idea how to determine the destination of each shared taxi. (I was always directed to the correct departure point though, thank you, Gohar). The secret was to rely on my host as a translator (via mobile of course) or a willing local taxi driver to stand me next to the correct intercity taxi.

How did I succeed with my AVC tasks?  Fairly well apparently. Folk in each centre enjoyed my English language presentations on food and transport in UK. And took part in discussions (in English of course) about doctors (the best are German, apparently – not UK sadly), and complaining, and mountains, and supermarkets. And I learned a little about Henrikh Mkhitaryan and Dorian Yates. And about Gyumri, Vanadzor, and Stepanakert, and the 13th century monastery at Hagartsin. (Thank you Stepan and friends from Vanadzor). And a country’s economy in transition.

And my host families could not be more helpful. Even though there might be language difficulties. One was especially appreciative when I posted an English-Armenian dictionary from Yerevan (she was unable to get one in her own town). My Yerevan host took her telephone call of thanks, of course. I could never have understood her Armenian!

And Armenian wives who never see summer – because that is the time they spend their days storing food in airtight jars for the winter.

A fellow swimmer summed the country up very well….. a small country with a big heart. I cannot deny that!

And thank you AVC for the experience.