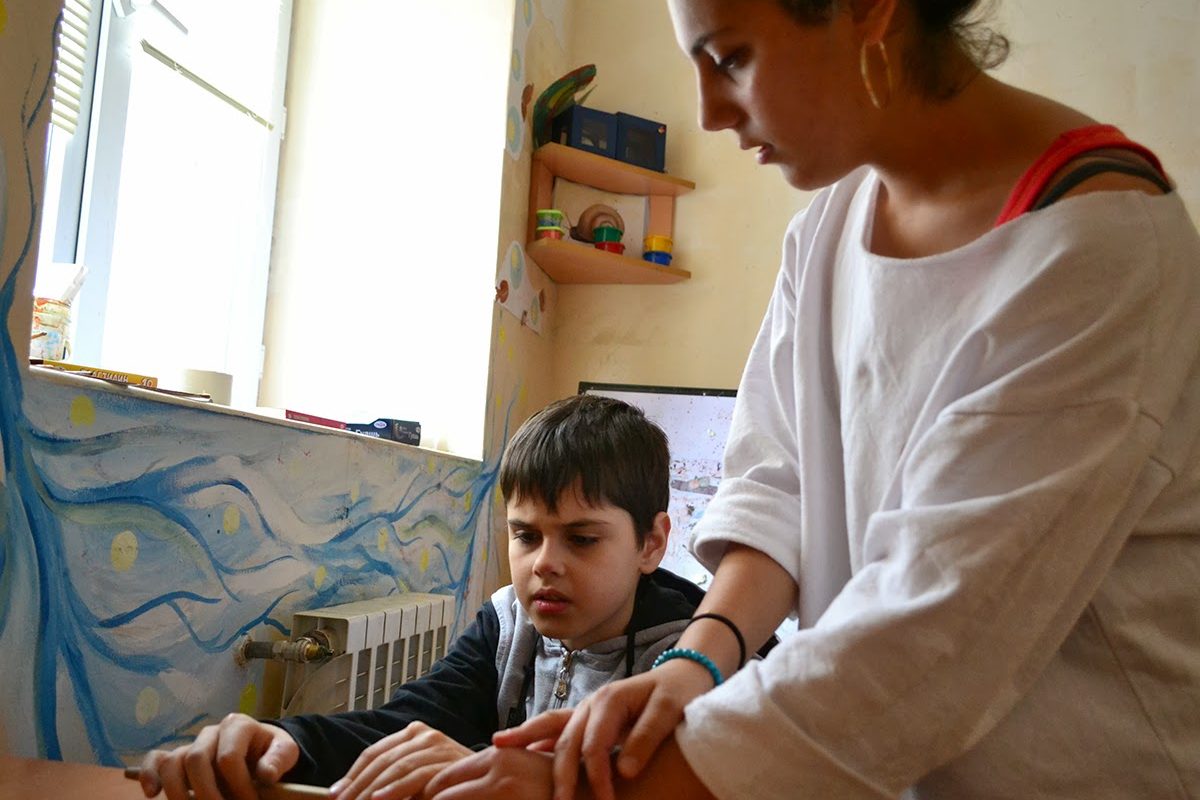 Meline Topouzian, USA, 2013 While I was fortunate to have multiple placements from AVC, one of those placements, I believe, truly embodies why the Armenian Volunteer Corps finds value in volunteering. The International Child Development Center, or ICDC, is a center for autistic children located in the center of Yerevan. The center has many therapists working with the children there, and autism is a spectrum disorder; kids come to ICDC during their normal school day, and when they are old enough or at a certain functioning level, they are able to alternate going to school and spending time at a center. The goal is to make them as independent as possible. So anyway, my initial job at ICDC was to do art therapy sessions, and after a while I was doing a social program with other therapists; it involved any and all activities in public areas outside of the center. Doing art therapy was interesting at first because of my background and interest in art. While I already understood the process of doing art, prior to this experience I hadn’t truly focused on such large scale, one-on-one work like this. Since I had already wanted to understand more about autism, this was a great opportunity for me to volunteer in a field that actually interested me. Over the first few weeks I quickly realized that this kind of work was not an “instant gratification” kind of job; I certainly did not leave every day with a tangible product or guaranteed progressed child. There were sessions where a child would simply come in, grab the paintbrush and just paint, without even acknowledging my existence, and it was amazing to watch them. But sometimes I would work with a few different children who, over the course of a few days or weeks, would seem to be improving and I would be very happy for them; without warning then they would come back to point A and it was frustrating and confusing. I found myself spending a lot of time asking questions and for help, just so I could understand what was happening and become a better worker for the child. On those days, I didn’t always feel like I was contributing. What I began to understand was that there was an underlying communication barrier between these children and I, and it went beyond our verbal communication. There were times when we were frustrated during sessions – the child didn’t want to paint, or was unresponsive, and I in turn couldn’t grasp why. Quite frankly, if someone asked me to come play with clay, or paint all day, I would never say no – but these children didn’t have my same logic, or process the world in the same was that I did, and there came a point; I can’t remember why or how this happened; where I had started to realize exactly that. For example, to explain; many of the children, when they came in to the art room, would come and just grab the water bucket that the paint brushes were in, take the brushes out, and just get their hands wet in that bucket. It was as if they all loved how water felt, as if that motion and the water calmed them down; there was a little girl who, when she was frustrated, we sometimes were able to calm her down by putting her hands in that bucket. And as odd as that may sound, it was actually kind of amazing. 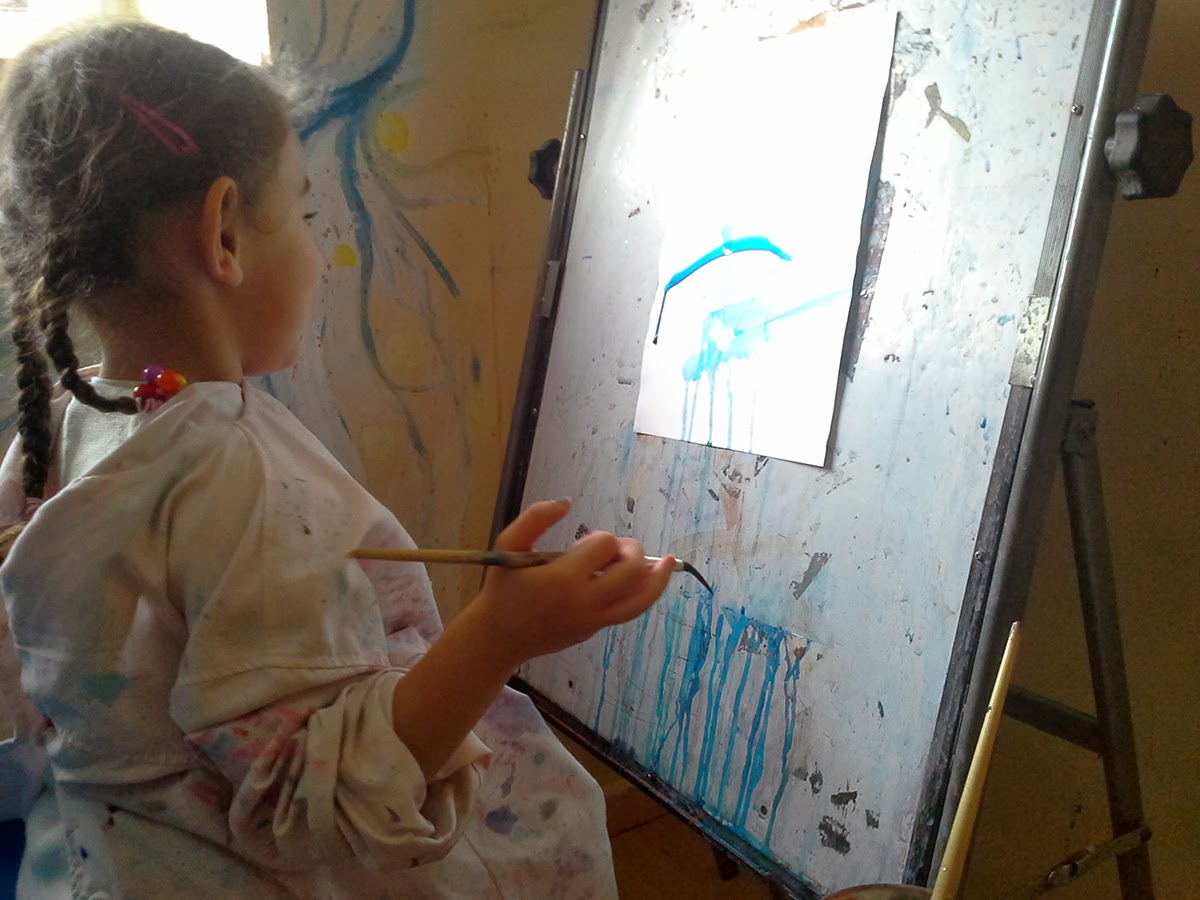 Sometime after I started truly noticing that these kids process sensory information differently, I went into my boss’ office during a break, and decided to poke her brain a little bit; I started to ask her what got her into this sort of work and, well, why she stuck around. I guess after being here for only a couple of months, I hadn’t truly understood why or how everyone could come and work so hard with each child, when there was never a guarantee for improvement; I didn’t understand her in the same way the workers couldn’t understand my coming overseas to work for no pay. Anyway, I asked her, and she looked up at me almost surprised but at a loss for words and simply said, “well, I don’t know, I love them.” And she began telling me about how she had been with nearly half of these children for years; at first as their therapist, and over time she’s seen them grow physically, emotionally and mentally. At first I thought, “did it take that long to see growth?” But I was quite mistaken – she knew what to look for. Like I said, this is a baby steps sort of a job; a child’s improved behavior or speech may not be the first thing I’d notice… but if I could see those children and the experience I’m trying to give them as one I’m doing simply out of love, like my boss had been, then I would see what everyone else was seeing. Couldn’t be more cheesy, right? Well, everything came together after that point, and I used a family analogy to process it. When we’re a part of a family, it’s not that we have to, but we usually get to a point where we unconditionally love our parents and siblings, or at least that’s my case, and it doesn’t really bother us if they dress funny, or say weird things, or eat dinner for breakfast and so on. And I guess the same can be said for close friends; eventually we just enjoy being around them so much that the quirks don’t really stand out so much anymore. So, to compare to the children at this center, I realized when I spoke to my boss that the staff here does unconditionally love these kids, it’s just not the “happy-go-lucky” love we may expect with kids, or are accustomed to seeing when we enjoy being around others. Because we do not always see the positive side of children right away with autistic children, we have to train ourselves to look for it; these workers have done that and are able to love these kids everyday as they are. What I eventually discovered was, as goofy as this may seem, I had been and was able to continue to love these kids unconditionally, despite my frustration, or heightened sense of protection for them. I had always held their hands tightly when I crossed the street with them outside, I was encouraging and happy even if they managed only one paint stroke during art therapy, and always gave a good hug to whoever was up for one. None of that changed… I simply got to a point where I was aware of how I felt, what I was doing; I mean, on paper I guess I was just a volunteer for this center, but I didn’t feel like one. I was an older sister to all of these kids, (even though half of them were taller and stronger than me). By the end of my time there, I knew almost every child’s gait, painting patterns and strokes, how they would react to certain music, and so on. As that pseudo older sibling… it was almost like we were using our ability – as therapists and so on – to understand their world, in order to help these children navigate in our world. There was an adorable, little boy whom we worked with in art therapy, and we focused on his speech development. I always hugged him, and played with clay with him, and it took him weeks to even start repeating my name. About three months in, I came into the center in the morning, and he was walking through the hallway, when he stopped and saw me; as he peeked his head around the corner I waved to him like I always did, except for the first time in he ran to me and hugged me! And every day until I left he did the same thing; it warmed my heart to no end. So, as my parting thought, as small of a gesture, or improvement as that may seem, it was absolutely the opposite. Those three months of work had built up to that moment, and that was the best part of my day; that was what I learned to look for. A little, five-second detail was what I needed to learn to see and understand. Everyday has, and has always had, those little details. And this is the beauty of volunteering. We will not always come or leave with something tangible or improved. But we will have always learned something incredibly valuable, and we will have been given an opportunity to act out of passion to serve others. These were not tangible things I discussed, and yet the best parts of my experience. The Armenian Volunteer Corps has facilitated these hundreds of opportunities because there is a value in people learning from and giving to each other. As volunteers, we are giving ourselves away; in love, in labor, in creativity and thought, and in good attitudes out of our desire to better the world in any way possible.