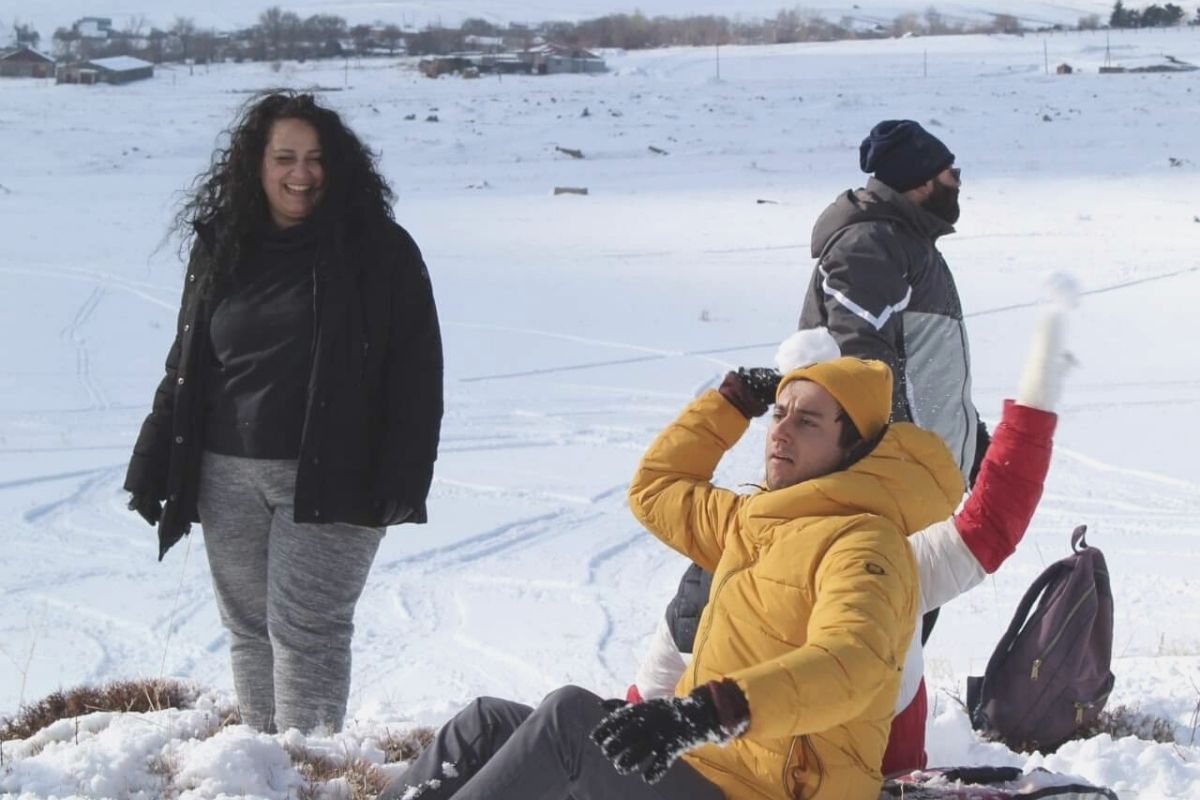 Excursions are a good way of discovering the beauty, tastes, and flavors of a country. But few of them can make us feel part of that country after all. We visit, admire, and leave. With this in mind, we organize around 40 excursions annually exceptionally for AVC and Birthright Armenia volunteers, placing high importance on immersive experiences.Through various activities we give them a deep dive into the Armenian reality and help them experience the country as a local would do.

Below we are presenting our top five excursions of 2021, each belonging to a distinct category. Collectively they help turn volunteers’ stay into an adventure — something that simple tourists can’t experience in their two-week visit to this historical land. 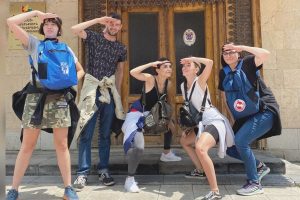 You may all visit the cultural capital of Armenia, Gyumri, and enjoy its beauty by simply strolling along the city. But what about discovering it through a game? Let’s Go Let’s Play was created by Birthright Armenia alums who, inspired by school games in Argentina, wanted to create a similar experience in Armenia.

The game aims to acquaint people with Gyumri not only by visiting the sightseeings but also through stopping by specific places that have history in them, encounter people, talk to them, and hear real stories. Among such places we visited was the Men’s Hairdresser’s in Gyumri, the oldest one. Some of the hairdressers there had been working since Soviet times and could share countless stories with us.

Another amazing place to visit was the carpentry of a young man, Arsen, who makes Armenian traditional toys called Hol (spinning top). Have you ever played one? You need to spin it the way it revolves on the ground. The better technique you develop and the longer it revolves, the closer you get to the winner’s title.

After visiting the aforementioned places plus many more, we went to Marmashen for a picnic lunch, with a view of two, big and small monasteries located next to each other on the bank of the Arax river, resembling Mount Ararat.

After lunch we had a city tour and learnt about the architecture of the city, visited churches, and famous yards where many Soviet-Armenian movies were filmed. Gyumri is also famous for its unique doors. If you are a fan of old and ornamented wooden doors, you will enjoy the tour by simply walking along the streets. Come join the next one!

This tour wasn’t just about informing our volunteers of our religious centers. With the choice of two locations we aimed to showcase the contrast between two totally different historical periods of Armenia — the middle ages and the Soviet period. Let’s start with the first one!

Sanahin and Haghpat, the two monastic complexes, are one of the brightest examples of Armenian religious architecture in their flourishing period. The monasteries date back to the 10th to 13th centuries and are registered in Armenia’s UNESCO world heritage.

Visiting the complex, volunteers could immediately catch its flawless beauty. Located in a grassy green landscape, the domes of both monasteries have greens on top, as if symbolizing that once they were not only religious centers but also a hub of illumination. With the help of the tour guide, our volunteers learned about its significance, the schools, illuminators, and calligraphers of the time.

As already mentioned, the second part of the tour was way different from the first one. We headed to the Matchbox Labels’ Exhibition in a neighborhood that looked reminiscent of the Soviet times — old buildings, a few Soviet cars, an old newspaper kiosk, and an old building where the exhibition was hosted. The feeling was quite interesting when we had to mentally transfer ourselves from the middle ages to Soviet Armenia.

The exhibition displayed thousands of matchbox labels from different countries, including Armenia, Japan, Thailand, and Europe. For those who are not aware, like we didn’t, it turned out that matchbox label designs were of big importance. Many of them were designed in a way to incorporate cultural aspects of the time. A lot of creative effort was behind these designs that depicted stories, ranging from labels with military planes to ones with samurai warriors and nude geishas. Curious? Come and join this and other informational tours and you will learn a lot of interesting things with us. 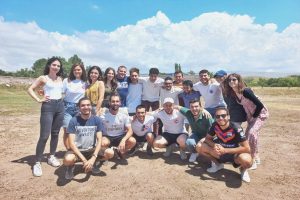 Bazmaberd is a town located in the north-west of Armenia that admires people with its specific natural beauty. There we have a family that has been hosting our volunteers for 10 years now, helping them experience the local environment. But let’s start from the beginning.

Have you ever heard of Tufa stone? Once thousands of such lava rocks were processed to build Yerevan. And now, due to its color, Yerevan is called a pink city. Driving away from the pink city, we started our tour visiting Tufa mines to discover what Yerevan is made of.

After seeing the mining process and taking some photos in a rosy background, we went home — our home in Bazmaberd. We were hosted in an extended house with a flowery yard, after which we had a coffee break, talked, danced Armenian folk dances, and played football against the Bazmaber people. By the way, playing football during this tour is a years-long tradition and we always lose, as we did this year. So, if you think you are a good football player, we urgently need you next year to finally beat them once in a 10-year period.

Meal time! But it’s not about sitting and waiting until something traditional would be served. Remember, this tour is about local experience. Therefore, we should first prepare our food. It was Harissa, a national Armenian dish with wheat and chicken, which took quite a long time to prepare until the wheat and meat became soft, congeneric, and porridge-like. But it’s worth it and had a special taste. Indeed it would — each of us had our share of contribution in its taste.

This year, as a bonus, we incorporated the celebration of one of the most fun festivals in Armenia — the water festival of Vardavar that dates back to the peagen times. Following the “instructions” of the main way of celebrating it, we poured water, a lot of water, to one another to clear all the negative emotions and thoughts of the year away. Sounds exciting right? Join the next one.

If you are in Armenia as a tourist most probably you won’t see this treasure unknown to most, as many tour agencies avoid doing tours to the castle due to the difficult walk. But it’s not as difficult as it seems. A two-hour hiking up and a two-hour hiking down is nothing compared to the beauty you will see at every step.

When hiking up, we enjoyed the mesmerizing view of Yeghegis village, with mountains hugging a gorge and the sunrays patting the mountains. A real movie scene! Reaching the castle, we ourselves were able to hug the view.

The castle most probably dates back to the 10th century and is named for Smbat, the Sunik Prince of the time. There is also a legend related to the capture of the castle. For many years no one could capture the castle due to its high location and the sophisticated water system it had to provide the castle with water year round. However, one old woman, after being captured, told the enemies to keep a horse without water for some days and it would find the water source for them. So, the castle was captured in the end. When we reached the top of the castle we could realize why it was so much desired for many centuries by enemies. You should experience it!

After hiking down we summed up the day with an amazing lunch in Artabuynq, in the nearest village. Again an Armenian family hosted us, with full tables of Armenian dishes, sharing with us not only traditional meals but also Armenian hospitality, care, and warmth.

As for countless years, this year too we went to the very northeastern part of Armenia, to Ashotsk village, for cross-country skiing. In a flat valley stretching for miles, we could safely ski and enjoy the snowy white view in front of us, accompanied with cold and fresh air. Spending there for two hours and losing some calories we “had to” get them back. So the time for the tastiest part of the tour came.

We again were hosted by an Armenian family in the village to have Panrakhash (boiled cheese). Have you ever tried this amazing dish? We first put a layer of lavash (Armenian traditional flat bread), then a layer of Gyumri string cheese. Then we repeated the layers several times and put four to five tablespoons of caramelized onion above it, made in a home-made butter. Adding some boiled water on it and waiting for a couple of minutes, we enjoyed the tastiest warm dish on earth. And don’t even think of tasting it right now at your place, as you have neither lavash nor the Gyumri cheese. The taste won’t be the same. Just come next year and leave the rest for us.

These were only five of our excursions among 40. Imagine how amazing it will be if you decide to volunteer for a year and take part in all the excursions? Each of them is better than the other. Apply to the program to enrich your life with these unique experiences.