Van life with Armenian Volunteering – How that happened | Ines Kiesling 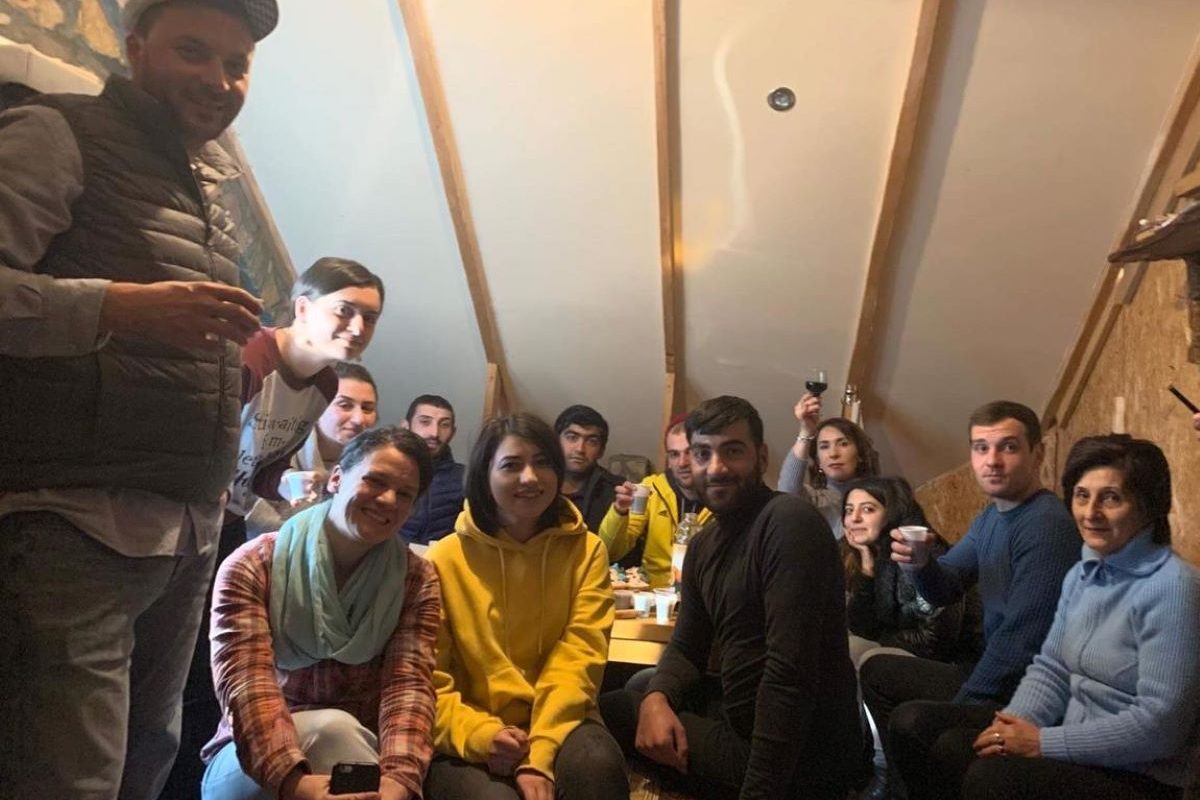 After traveling with my van from Germany to Georgia via Russia many people told me to checkout Azerbaijan, Armenia and Iran instead going directly to Turkey. As I was already in Georgia I thought, “Why not? I am already here”. So, I traveled to Azerbaijan and I experienced the first night with minus degrees. As I was already traveling for more than seven months without any stopping it was the right time to have a break for a while and spend the cold days in one spot. “Giving back” was something I also wanted to do during my traveling. That is why I started to do some research for places I would be able to volunteer in Azerbaijan or Armenia.

I found Armenian Volunteer Corps (AVC) and did the effort to answer all the questions and provide all the forms and papers which they wanted. 😊 Lot of work for me, but after sending my e-mail, I received a really nice reply from Anahit on the same day, that they were interested in my work power, even if I would arrive quite soon. We agreed that I would arrive in Yerevan in 10 days. From the beginning it was such a pleasure working with AVC: fast, really nice replies, good communication, great help, professional work. After checking some old monasteries in the north, having the first snow while driving over the mountains I arrived in Yerevan having a date in the evening at the AVC office.

From the beginning I felt so warm and welcomed; taken care of from everyone. My hosts, a young couple, were already waiting for me, so I also had a nice warm place to go and stay. As I was used to managing everything on my own for a long time while traveling, the awesome work of AVC, to welcome and organize everything for me, was such a great pleasure. To be able to learn Armenian for free and get great excursions organized (for quite cheap), to be able to meet volunteers from different countries, making new friends, felt like such a luxury. The work AVC found for me fit perfectly to my work back in Germany (Outdoor Team Trainer) and my interests. I was placed in the mountains at the two sister companies Yell Extreme Park and APAGA Resort. Unfortunately to start working for them took a bit of time, but as the work was promising and I really liked everybody from AVC and my hosts, I prolonged my time in Armenia from 2 weeks to 1.5 months.

In January I arrived in the little city of Ijevan, to work for Yell and APAGA, staying with a real Armenian guest family. It was like being part of a little family for a while, though only the daughter spoke English. Working for Yell Extreme Park and APAGA Resort was also a unique experience. Even after leaving I was in my thoughts with the 2 different teams and I am still in contact with some of them. My tasks were to motivate both teams to improve their works skills, improve teamwork, help to provide better customer service, compare the security standards of the zip lines and rock climbing to German standards and much more.  The days working at Yell and APAGA went by so fast. I am happy and grateful for spending these weeks with all these wonderful people. But not only did these great people make these sessions a unique experience for me; it was also doing my way of trainings in a different culture, with two “simultaneous” English-Armenian-translators. Me not being able to understand, follow and lead some of the ongoing discussions, as well as working with two quite different teams on similar topics. The APAGA team was quite diverse, consisting of the management of the resort, service staff, horseback riding guides and Eduard who was organizing the parking of the guests. Most of the team staff have worked there for a long time, some since the founding of the place. In average they were older than the Yell team. But from the beginning they were much more open to my style of teaching and what I was doing with them. It was such a joy and fun playing some quick energizing or team games with them. Or having a spontaneous Yoga session during my First Aid course. Most members of the much younger team of Yell needed some more time to open to these things. I was working with many different teams in Europe, so it was quite interesting for me working with an Armenian team and exploring the differences. For example, collecting opinions and ideas: I like to get small groups or two people together working on some topics to collect all voices in the end. I realized in Armenia it is more common that the leaders of the group are speaking for everybody. After doing team tasks, I made the group reflect by themselves what could be improved or what worked well. The transfer of the experiences to the daily work life was also worked out by the group themselves. They told me that usually the teacher, boss, instructors or group leaders are giving the solutions, views or own opinions. Finding the solutions by themselves while I was only leading them into a direction and asking questions was a totally new experience for them. Also, that a woman is working as an experienced guide and instructor of new guides in a high rope course and for rock climbing was a new experience for all of them.

I had the impression, and got the feedback later, that I made a difference in the two teams and was able to move “a little mountain” 😉. I also learned a lot during my time working in Ijevan but also during my stay in Yerevan. Happy me, I was also able to travel a bit around in Armenia including Artsakh and was surprised by its beautiful nature, great landscapes, hiking possibilities, mystical monasteries and so much more.  I definitely will come back to explore the country and visit my new friends during a warmer time.

After leaving Yell and APAGA I missed our morning coffee routine, getting great lunch and yummy tea served and prepared by lovely people, having fun playing team games – or complaining about them 😉, driving every morning up to the resort in the team van through a stunning landscape with the awful music of our driver, reaching the resort with its wonderful view and animals, and so much more. After preparing a fitting session for either YELL or APAGA Resort every day, it was weird getting back to my normal travel routine.

My initial wish was to give something back. But I received so much more in return… I am very thankful for being trusted and welcomed in such an open way, being able to feel as a part of little families and two teams for a bit, receiving positive energy from everybody, for my goodbye gathering and presents (including the impressive chocolate torte made by Yeprem), all the things I was able to learn from each single person and having new friends who still care about me while traveling. I hope to see them all soon in the future/APAGA and wish them all the best.