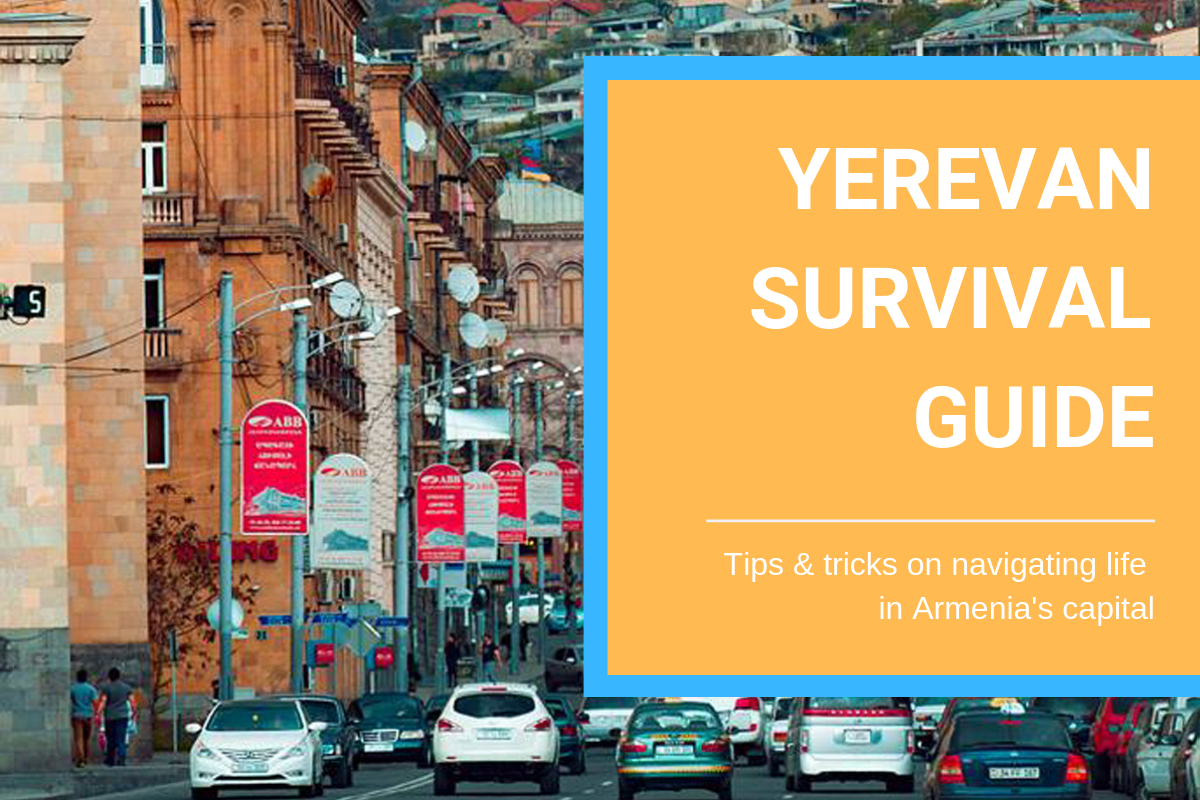 Upon arrival in Yerevan, there is sometimes confusion. New smells, sounds, systems, and for many a new language. After spending 7 months in Yerevan, I have learned some of the ins and outs of life in this city that you will likely not find in a travel guide. Locals may not realize that many of these things are out of the ordinary, as we each have our own normal. I went through this shock when I arrived in Armenia in late January of 2018. I am a 23-year-old, half-Armenian male, who doesn’t look Armenian or speak Armenian. My experience here has been more similar to one of a non-Armenian than of someone of Armenian descent.

Metro – Yerevan’s metro system is little known to many visitors, but it is one of the best ways to get around the city. Especially in the summer when the underground is the coolest transportation method. No card is needed in the metro, simply go to the counter and exchange 100 drams for a token to get you through the gate. The Yerevan Metro is a fast and efficient way to navigate the city, however, it has a limited range and does not give access to the entire city. The Metro is displayed through google maps. 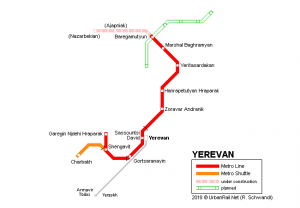 Marshrutka/Buses – sit in the front when you can. Don’t slam the door too hard, or you will hear about it from the driver. For Android phone users, it is recommended to use the A2B Transport app. This app is easy to use and lets you understand which bus, marshrutka, or cable car is going where you need it to. For Armenian speakers, http://marshrut.info/ can give quite a bit of helpful information. However, you can always go to the window and ask the driver if the mashrutka is going where you need it to. To get off on the stop you want, simply say “Kangnek” (kang-nek) and the bus will pull over at the next stop. Pay 100 drams before getting off. Taking public transportation is one of the cheapest and fastest ways to navigate Yerevan and gives you a better understanding of daily life in the city.

Marshrutka – The most common form of transit between cities in Armenia is the marshrutkas. These large vans have some quirks that may seem strange to new arrivals here. First of all, there is no true “schedule”. Usually marshrutkas go on the hour, but for most high traffic routes (Yerevan to a major city such as Gyumri, Vanadzor, or Dilijan) they simply leave as soon as they fill up. Simply find the correct marshrutka at the bus station (there are three stations in Yerevan) and take a seat. Your money will be collected before the marshrutka leaves. On your ride, it may happen that they may need to refill the marhrutka with gas. Many vehicles in Armenia run on compressed natural gas. During fill up, you will be asked to get out of the vehicle as a safety precaution.

Railways – Trains are a more comfortable means of transportation in Armenia. There are trains from Yerevan travel to Tbilisi, Batumi, Gyumri, Vanadzor, and Sevan. Trains between Yerevan, Tbilisi, and Batumi are usually overnight. This is nice since you arrive in the morning at your destination so you can maximize your travel time at your destination.

Hitchhiking – One method of travel that is common in Armenia is “Avtostop” (Russian for hitchhiking) better known in English as hitchhiking. While traveling outside of Yerevan, many times it can be easier to hitchhike between villages than to wait for a marshrutka. Armenians are usually very willing to pick up strangers on the side of the road who are looking for a ride. For safe and easy travel, it is recommended to look clean, travel in groups of 2 to 3 people, and to have a mixed-sex group. Additional information can be found here: http://hitchwiki.org/en/Armenia

Taxis – Taking a taxi is a very common form of transportation worldwide. Here in Armenia, there are several taxi services with free mobile apps, such as gg, Yandex, and UTaxi. Simply drop a pin where you are on the map, where you want to go, and your ride will appear shortly. Payment can be with either cash or by credit card.

Money – It can sometimes be difficult to break a 20,000 dram bill. Luckily there is an easy way to avoid this problem. When going to an ATM, simply select “other amount” and pull out 19,000 drams. This combination will give you a variety of bills that are much easier to use.

Cellular Phones – Getting a mobile phone plan in Armenia is very easy. Compared to the United States where an expensive long-term plan is required, Armenia has relatively inexpensive phone plans that can be paid monthly. Paying bills is as simple as going to one of the many service centers or paying via the Vivaro computers that are located on most busy streets. Simply pick your mobile provider, type in your phone number, and insert the money needed to renew your tariff plan.

Healthcare – Healthcare in Armenia is affordable. A healthcare plan will be set up for you by the Birthright Armenia or AVC staff. It is affordable, and there are hospitals almost everywhere you go.

Pharmacy – Pharmacies are everywhere in Armenia. You will have no trouble finding medical products whenever you need them. Just look for the green crosses.

Shopping – Shopping can be an interesting experience in Armenia. Be prepared to be followed very closely while in shops. When shopping for most items, it is recommended to look outside of the city center, as products in the “Kentron” (center) are far more expensive than outside of it. Finding food in grocery stores, clothes, household items, etc., is easy as soon as you get away from the touristy areas of the city.

One huge benefit to summer in Armenia is the fruit. There is no shortage of high-quality fruit available everywhere, and I mean everywhere. Buying fruit or herbs from someone selling on the street, in a courtyard, or out of the back of their car is totally normal (and usually a better deal than buying them from the store).

Pupulaks – One great feature of Armenia are the many drinking fountains, called pupulaks. These fountains are usually always running, providing fresh drinking water to those in need. One very handy tip is when wanting to fill your own water bottle from the fountains, simply place your finger on the spout to redirect the flow into the air at an angle.

Culture – If you’ve never been to Armenia before, it is possible that you will have some culture shock upon arrival. This is normal, and sometimes it can take some time to get used to new customs or cultural practices. Some that were noticeable to me was as follows…